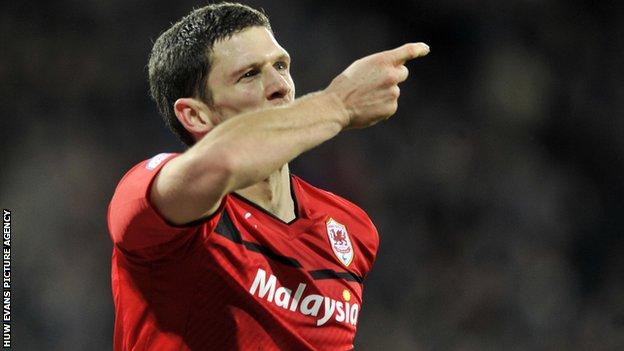 Hudson scored Cardiff's second goal in a 2-1 win that maintained their 100% home record.

Malky Mackay's side had lost their previous two away games, including a 5-4 midweek capitulation at Charlton Athletic.

"[We're] really delighted to get back to winning ways after such a tough week. It shows the character we've got in our dressing room.

He's [Helguson] really highly thought of in the dressing room. He's a character and a leader and someone that you need in there

"We all stick together and driving forward and eight out of eight is brilliant."

Victory over Hull was Cardiff's eighth successive home win this season and they face Middlesbrough at Cardiff City Stadium next Saturday.

Away from home Cardiff have only won twice this season and Hudson hopes they can finally banish their away day blues with games at Barnsley and Derby coming up.

"There is obviously something there at the moment but maybe we're a bit too open away from home," Hudson added.

"But if we can turn our home form into our away form, we'll be flying.

"We've got another tough home game again next week. I'll look forward to that and then try and gets some points away from home."

Helguson had to have lengthy treatment after scoring with a header and Hudson has echoed manager Malky Mackay in hailing the Icelander's bravery.

"Not many would have come back on after that. He came back on and still put himself about.

"If you're going to sum Heidar up you would say he is brave.

"[He'] 35-years-old and puts his head on the end of everything, keeps going and has played nearly every game this season so far.

"He's really highly thought of in the dressing room. He's a character and a leader and someone that you need in there."