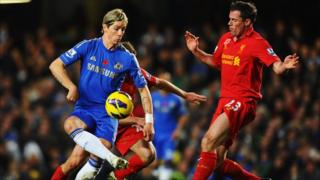 Jamie Carragher believes Liverpool's 1-1 draw with Chelsea at Stamford Bridge is a "good result" for the team.

The central defender reveals manager Brendan Rogers had told the side they had been too "tentative" during his half-time team talk, inspiring the side to fight back to earn a point - their sixth draw of the campaign.

Carragher's flick-on led to Luis Suarez's equaliser, with the Uruguayan now having scored six goals away from home, the most of any Premier League player so far this season.