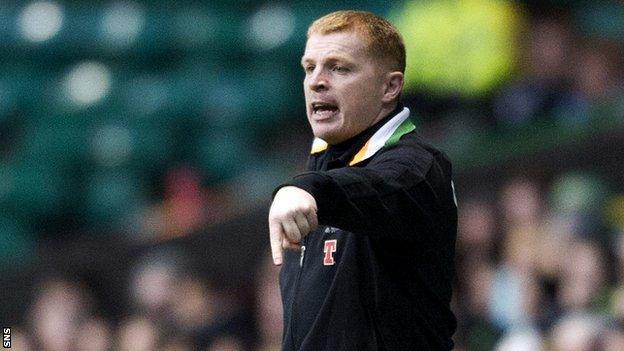 Celtic manager Neil Lennon hopes Charlie Mulgrew and Kris Commons can be excused from playing in Scotland's friendly with Luxembourg.

Lennon's captain Scott Brown is one of the senior players being rested for Wednesday's game.

But the boss would like to see others given a break after a busy schedule.

"In the middle of all the games we are playing, this is the last thing I need and the players need," he said after the 1-1 draw with St Johnstone.

Billy Stark is leading Scotland for the game against Luxembourg in the wake of Craig Levein's dismissal.

And Lennon has already spoken to the former Celtic midfielder about his concerns.

"He understands and that's the reason Scott is out already," revealed Lennon.

"Does he really need to play them at this stage of the season? I'm not too sure. But he might want to.

"I'm not sure Charlie will be fit enough after today anyway."

Giorgios Samaras, Victor Wanyama, Mikael Lustig and Beram Kayal are other players who have been called up by their national sides, while Adam Matthews and Joe Ledley will attend a squad get-together with Wales.

"I'm hoping to speak to a couple of international coaches this week," continued Lennon.

"We're only a month or so after a double-header, so what are coaches going to find out about their players that they don't already know?

"Unless they are going to blood new players.

"In terms of guys travelling halfway around the world to play a friendly, I'm pretty concerned.

"It's a great opportunity to give the players a rest this week because we haven't been able to do that for a month.

"That's the price you pay for being in four competitions, which is where we want to be but the flip side of that is fatigue.

"We have Aberdeen and Benfica coming up and, particularly Benfica, these are monumental games that could shape our season."