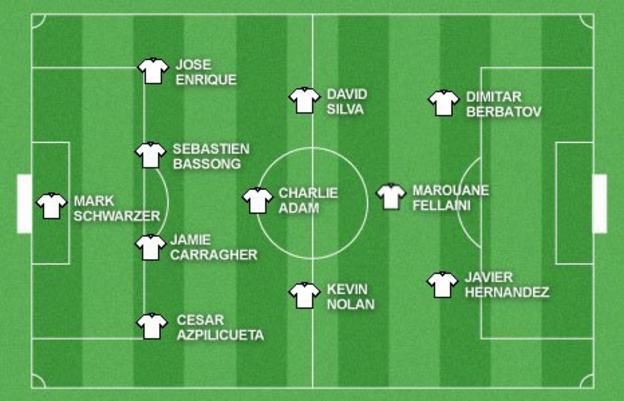 Manchester United remain clear at the top of the Premier League after the thriller at the Villa. Man City pulled an important victory out of the bag to keep the pressure on their neighbours and their unbeaten league record intact.

Meanwhile, Everton remain comfortable in fourth spot as the pressure increases around Mark Hughes following another dismal performance by QPR. 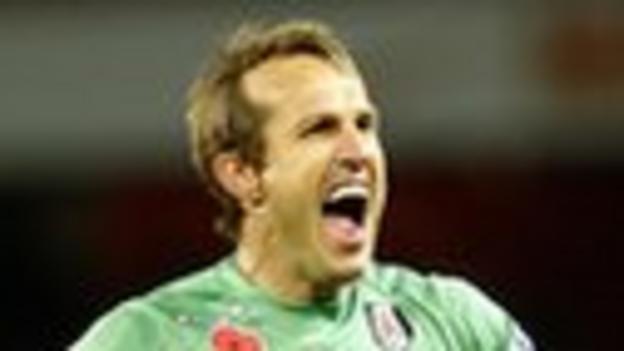 Only once have I ever selected a goalkeeper in my TOTW who conceded three goals. Needless to say the keepers in question turned certain defeat into something much more satisfying. Mark Schwarzer's performance, not to mention his last-minute penalty save, in this London derby classic was about as relevant as it gets.

Did you know? Only David James (169) has kept more clean sheets in the history of the Premier League than Mark Schwarzer (143). 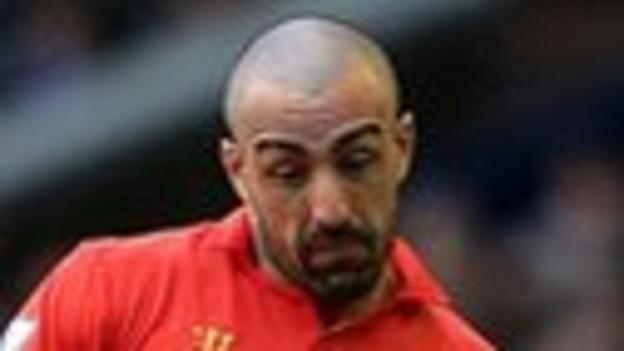 This is the best game I've seen from the Spaniard for some time. Against Chelsea he was his normal solid, dependable self, posing a serious threat down Liverpool's left-hand side in a very adventurous defensive set up. 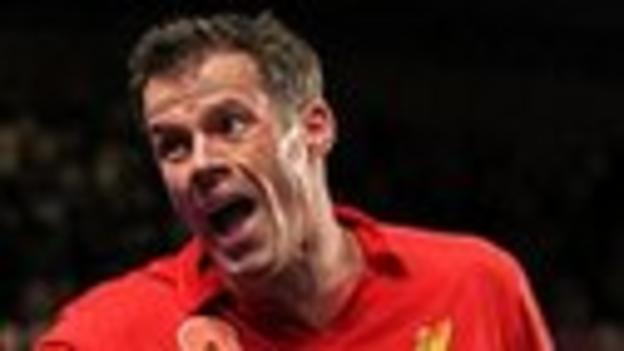 When you consider how long he's been out of Liverpool's starting line-up and the way he slotted into a new-look back three, you'd have thought Jamie Carragher had never been away. He was superb at the back for the Reds. Vocal and commanding, he provided the perfect assist for Luis Suarez's well-taken equaliser. Liverpool's new Crazy Horse! (For those too young to remember, I mean the first Liverpool skipper to lift the European Cup, Emlyn Hughes). 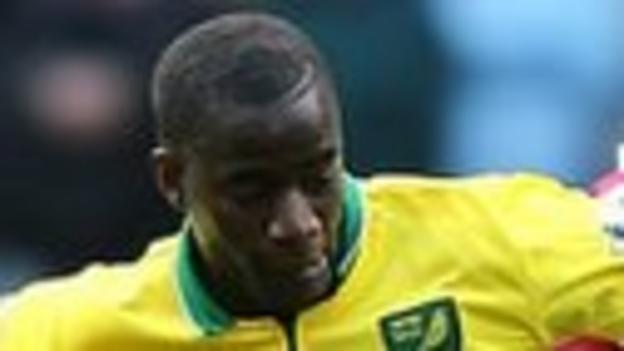 It was one of the most desperate games I've seen so far this season but Norwich still gained a valuable point and another clean sheet against Reading. Bassong single-handedly kept Jason Roberts, Stephen Hunt, Jobi McAnuff and Pavel Pogrebnyak quiet.

Did you know? Sebastien Bassong has made a team-high 62 clearances this season for Norwich in the Premier League. 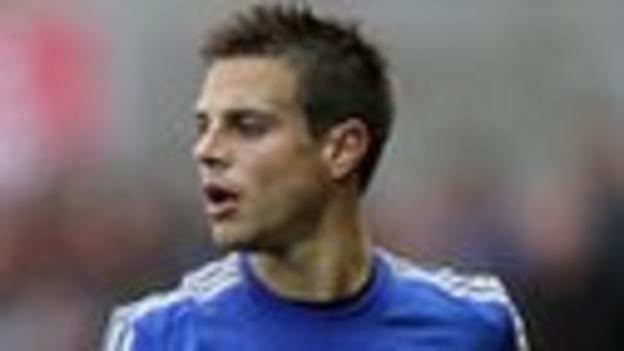 For some time, Chelsea have struggled to find a solid right-back who can fulfil the role with any consistency. Cesar Azpilicueta looks like he might be the one who can cope with the demands of playing in the Chelsea defence without buckling under the pressure. He looked competent against Shakhtar Donetsk and even more adventurous against Liverpool.

Did you know? Cesar Azpilicueta won all four tackles he attempted against Liverpool and also whipped in six crosses, more than any other player on the pitch. 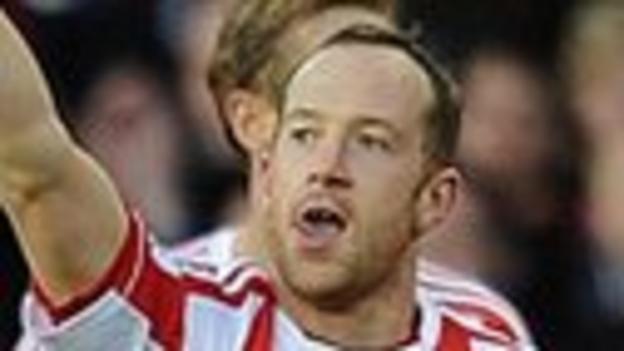 The former Red has not made my TOTW since his outstanding performance for Liverpool against Chelsea at Stamford Bridge last season. I described the Scot on that day as having Souness-like potential. Well, he's not scaled those dizzy heights yet but for Stoke against QPR he did look like a man with an awful lot to offer.

Did you know? Charlie Adam netted his first league goal for Stoke and his first top-flight strike since October 2011, when he scored for Liverpool against West Brom. 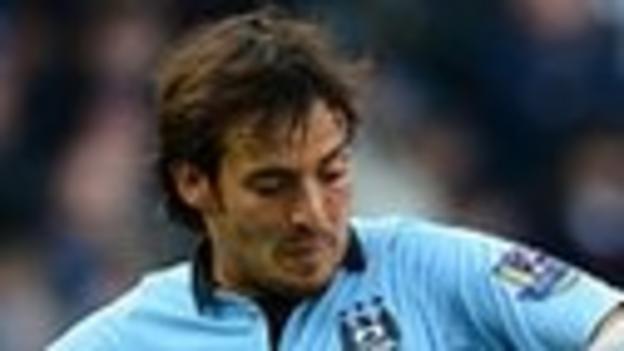 He's not had the most exhilarating season so far but against Spurs he looked more like his old self. He took control of the game in the second half and provided the pass for Edin Dzeko to grab the winner. A touch of class.

Did you know? David Silva has created 203 goalscoring chances for his team-mates in the Premier League since arriving at Man City in the summer of 2010, more than any other player in the same period. 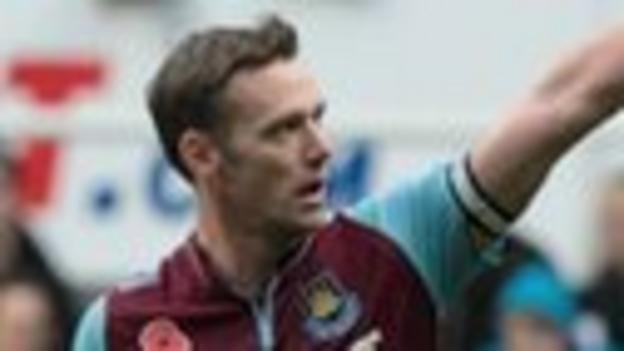 Another professional display by Nolan against his former team must have been particularly satisfying. Not only did he get the winner, he provided Andy Carroll with a gilt-edged chance to seal the game. Now that would have added insult to injury!

Did you know? Only three of his last 17 Premier League goals have come on the road, one at St James' Park (for West Ham), and one apiece at Upton Park and the Stadium of Light (both for Newcastle). 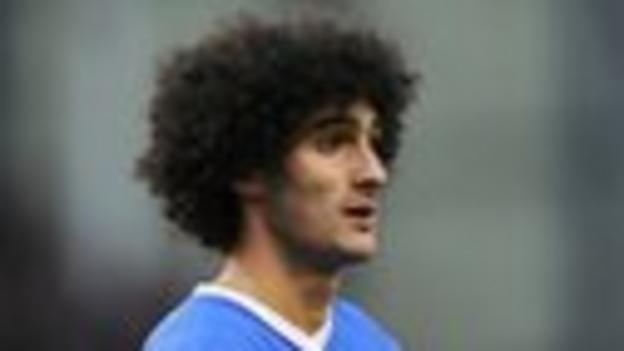 There's just no stopping the fella. He's been outstanding for Everton from the moment the season started and it was his menacing presence and superb finishing that crippled any chance of Sunderland mounting a comeback. But what's he worth and can Everton hang onto him?

Did you know? Marouane Fellaini has scored as many goals this season in the league as in his last three campaigns combined (six). 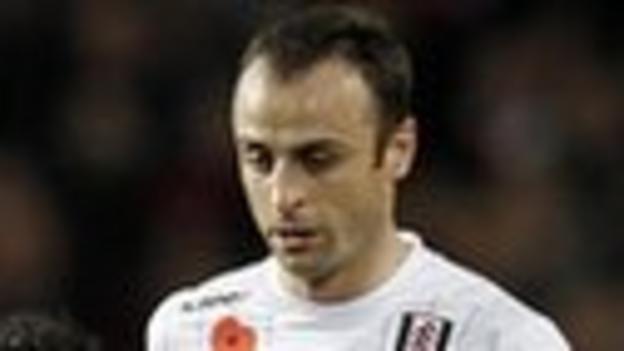 The post-match question left Arsene Wenger floundering: why didn't you buy Berbatov when he was available? Answer: I didn't know he was available. Well everyone else did! For the second time in three weeks Berbatov makes my TOTW. His two goals and one assist in this six-goal thriller simply reaffirmed his class and coolness under pressure.

Did you know? Dimitar Berbatov has been directly involved in eight goals (five goals, three assists) in only seven league appearances for Fulham since moving to west London. 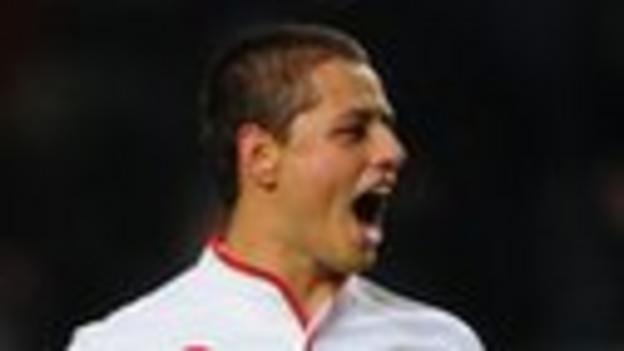 Sir Alex Ferguson has made some amazing substitutions in his time but nothing like the one that left Villa Park buzzing. The impact Hernandez had on Aston Villa and the game was nothing short of staggering. I couldn't believe anyone had the nerve to try to deny the Mexican his hat-trick. So the ball went in off a defender - big deal!

Did you know? Javier Hernandez is the seventh different Man Utd player to score a brace off the bench in the Premier League and the second (after Diego Forlan) to do it against Villa.