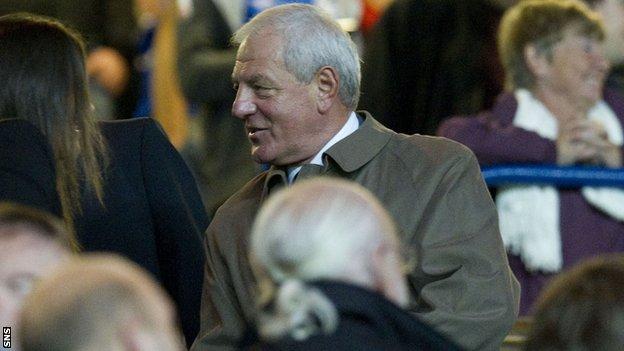 Walter Smith has returned to Ibrox as a director of Rangers.

"It is a great privilege to serve the club that means so much to me," he told the club's website.

Current boss Ally McCoist, who previously served as Smith's assistant, believes the 64-year-old's presence "will be a huge benefit to the club".

"I am delighted to see Walter involved in the club again," McCoist said.

"He brings tremendous experience, he has done it all and is a Rangers man through and through."

Chief executive Charles Green also welcomed the appointments, commenting: "It is extremely important to have a board that has the respect of investors and Rangers supporters.

"The consortium I led to buy the club are not Rangers people but there could be none better than Walter and Ian to fill that void and we are delighted they have agreed to become non-executive directors."

After leaving Ibrox in 1998, Smith managed Everton and Scotland before returning to Rangers in 2007 and, with McCoist as assistant, he led the club to three more titles.

McCoist succeeded Smith last year but the club entered administration several months into the former Ibrox striker's reign and were eventually relaunched by Green's consortium after liquidation could not be avoided, with

"I must make it clear that I will not be playing any role in the day-to-day running of the club or the team," added Smith.

"It's the manager's job to run the team and the chief executive's job to run the club's affairs. The role I will fulfil is to bring my experience of Rangers and football in general to the board table.

"The people who purchased the club have shown over the last few months they are serious in their intentions to rebuild Rangers and I am happy, as many other fans have done, to lend my support."