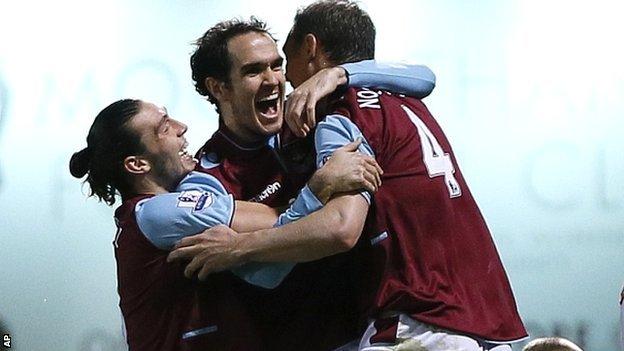 Joey O'Brien scored his first Premier League goal as West Ham fought back from a limp first-half performance to earn a point against Stoke.

The Hammers were fortunate to only trail to Jonathan Walters' stinging drive at the break, with Steven Nzonzi rattling the bar for the visitors.

Kevin Nolan went close after the interval before O'Brien steered in Gary O'Neil's low cross from the right.

West Ham began the evening in the knowledge that victory would send them into fifth place and mark their best start to a league campaign since 1986.

Woe on the the road

The history that Stoke were attempting to make was more short term - a first away win in the league since beating Blackburn on 2 January.

The Potters would have been optimistic of ending their search for three points on the road after comfortably containing West Ham before the interval, but had to settle for just one after being hounded through a barnstorming second half that defied cynics' expectations.

Both Sam Allardyce and Tony Pulis have been irritated by attempts to characterise their teams' style as uncomplicated and direct but neither did much to dispel that impression early on.

Stoke's attempts to send long balls towards the head of Peter Crouch proved more promising than West Ham's crosses towards Andy Carroll at the opposite end.

Charlie Adam shanked a volley over the top from a knock-down before Crouch himself could only direct a tame nod into the gloves of Jussi Jaaskelainen.

A reputation for well-worked set-piece routines is something that Pulis has been happier to earn and a perfectly executed training-ground move delivered the opener.

West Ham play a top-eight side in six of their next seven games.

With their attention drawn by Crouch and Ryan Shawcross's runs to the near post, the Hammers defenders failed to track Walters who appeared in a pocket of space to swipe home Glenn Whelan's precise corner.

Reverting to a more patient build-up, West Ham had glimpses of goal - Mohamed Diame missing his kick after a cute backheel from Kevin Nolan before the skipper himself fired straight at Asmir Begovic - but Stoke finished in the ascendancy with Nzonzi crashing a half-volley against the bar.

Stoke emerged early for the second half, but West Ham swarmed all over them from the first whistle.

Nolan had already failed to apply a telling touch from two yards when O'Brien stole in front of Shawcross to stab O'Neil's low cross into the roof of the net.

The Stoke rearguard was flustered and was almost breached again soon after as Maiga side-footed against the legs of Begovic from Carroll's knockdown.

With his side reeling, Pulis introduced Wilson Palacios at the expense of Whelan to apply the brakes to a rampant West Ham.

The switch, combined with some streetwise delays over goalkicks, succeeded in stabilising the visitors and drawing the sting from the hosts' attacks out wide.

West Ham were unable to rediscover the penetration over the final quarter as Stoke dug in and defended stoutly to close out the game.

"Stoke were slightly better than us in the first half and we had to recover from what was an extremely good goal.

"Having to come from 1-0 down in any game in the Premier League is difficult.

"It's another point on the board, we move on reasonably happy.

"Andy Carroll is not to be frustrated by the fact that he is not scoring at the moment and in fact today he didn't get much of a chance to score.

"He wants to score a goal and he wants me to leave him on for 90 minutes but at the end of the day he put that much effort in, there are a lot of fresh players on the bench."

Stoke boss Tony Pulis: "First half I thought we played well and created the better opportunities and really we needed that second goal.

"The worst thing that happened to us was half-time. That took the momentum away from us.

"We started very sloppy in the second half, we invited West Ham onto us and they scored a goal and from that point onwards we need to show a lot of resilience and determination.

"We have worked on it for the past three days, we tried it five or six times and Jonathan Walters has never scored from it so I'm glad he saved it for today.

"All of my career I have always looked for little angles and little areas that we could exploit from set-plays and it is lovely when it comes off."