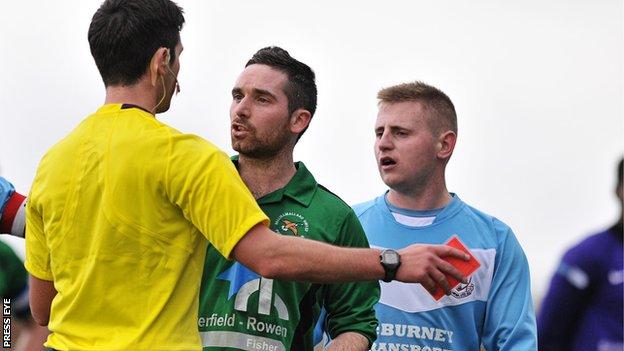 Ballinamallard United are set to appeal a six-match ban handed out to Jason McCartney for an alleged headbutt during his side's game with Ballymena.

The midfielder was shown a straight red card just before half-time in the Irish Premiership fixture on 27 October.

"Jason strenuously denies the charge and the club has supported him by issuing a challenge," read a statement.

"This is supported by a statement by Jason himself, a number of eye witness accounts, as well as video evidence."

Subject to the IFA accepting that the challenge is in order, McCartney's suspension will be set aside pending the outcome of the case's consideration by the IFA Disciplinary Committee.

He returned to the Ballinamallard team for last Saturday's 2-1 defeat at Portadown after serving an automatic one-match suspension for the dismissal.

However, he has been handed the extra ban because it was a butting offence.

Former Sligo Rovers player McCartney was sent-off after an incident which sparked a melee between a number of Ballymena and Ballinamallard players.

Mark Surgenor of Ballymena, who was sent-off later in the game, has received a two-match suspension for serious foul play.

Second-placed Ballinamallard's next league match is at home to Donegal Celtic on Friday night.