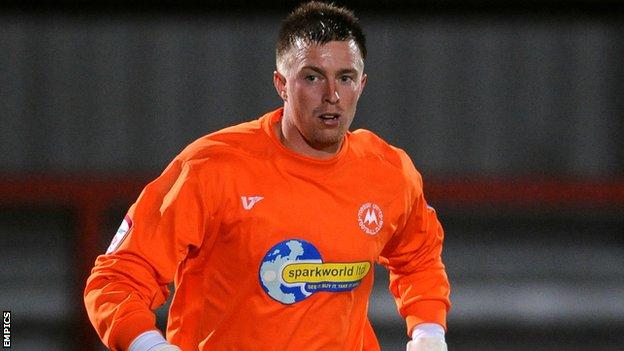 Rice, 26, kept a clean and made a number of fine saves in the after replacing injured first-choice custodian Michael Poke.

"I'm pleased for Martin because he's sat on that bench for an awful long time," Ling told BBC Radio Devon.

"He works his socks off in training, he's always out there."

Ling continued: "He's always willing to get into the goal and let lads shoot balls at him and I'm really pleased for him."

He joined the club in in June 2007 after moving from rivals Exeter City, where he got his first professional deal in 2004.

Rice played 62 games for Exeter and 15 games for the Gulls in the Conference, FA Cup, League Cup and FA Trophy, before making his Football League debut.

Rice was in goal for Torquay's FA Trophy final defeat at Wembley by Ebbsfleet in 2009, but missed out on Exeter's Conference play-off loss to Morecambe in 2007.

He played his on Tuesday when he came on as a substitute at Barnet for Poke - the ground where he played his first senior match in October 2003.

"It's been a long time coming, his full league debut. He's 26 now and he can be proud of himself," Ling said.

"Sometimes an opportunity comes along and people take it, and you have to make decisions.

"Ricey's done himself no harm with what he's put in front of me."