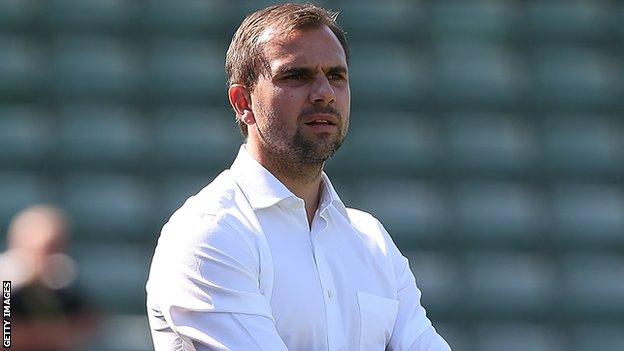 Plymouth boss Carl Fletcher was left frustrated despite a "brilliant" display by his side in the 2-2 draw with League Two leaders Gillingham.

The Pilgrims twice led at Home Park before being pegged back.

"We should have won the game, it's as simple as that," Fletcher told BBC Radio Devon.

"It's disappointing, but my lads were brilliant today, they worked their socks off, worked hard for one another and showed a bit of quality."

Argyle went into the game after four successive defeats, with

His side was booed off following their which followed an embarrassing

"Gillingham are steamrollering everyone they come up and against and we showed a lot of heart and a lot of desire.

"We had a game plan of what we needed to do and I thought we stuck at it really well," he said.

"It was a daunting game, we'd just lost four on the spin, and the league leaders are coming here turning over every Tom, Dick and Harry.

"Credit to the lads, they worked so hard for one another.

"We played well with the ball and looked fairly solid without it for the majority of the game, so it was pleasing," Fletcher added.