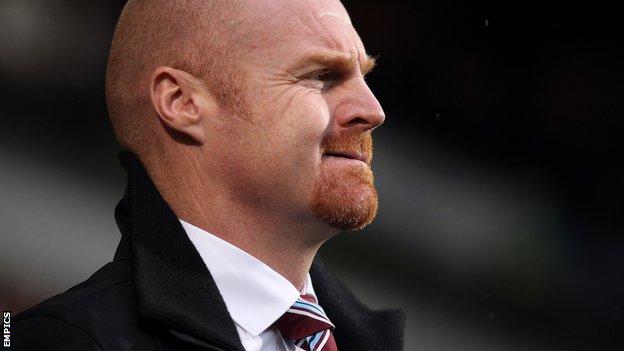 Sean Dyche was unhappy that Ipswich's first goal was allowed to stand in Burnley's 2-1 defeat at Portman Road.

Daryl Murphy put the hosts ahead after his challenge on goalkeeper Lee Grant was deemed fair by referee Mark Brown.

Although disappointed with the decision, Dyche admitted it was not the only reason for his

"We can't put it just down to that, but it did change the feel of the game, not just the scoreline," he said.

He told BBC Radio Lancashire: "When there's physical contact of that nature with a goalkeeper, they get given as fouls. The referee had given one in the first half that was a soft decision.

"I try not to moan about referees because I think it's a really tough job.

"To come away with a 1-1 would have been appropriate for the performance, but sometimes that doesn't happen. Right at the end, we got our pocket picked."

Burnley had under their new manager, and a point against the Tractor Boys would have put them ninth in the Championship.

"We thought we did enough to get a point," added former Watford boss Dyche. "There were some really good aspects to our performance.

"We kept the ball and moved it well, although I feel we still need to move it quicker to really open teams up.

"We didn't create as many chances as I would like and we need to turn that possession into chances. That's something we can work on with the players."