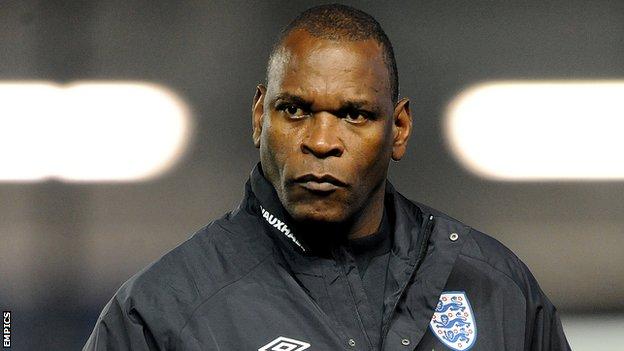 The Blue Square Bet Premier side will host an under-19 international between England and Finland on 13 November.

"We try to spread the games around to reach young fans from all over the country. These clubs put on a good show and reach kids at the grassroots."

The Bucks Head has a capacity of 6,300 with it's seating stand already sold out.

"We've used the Bucks Head before at under-16s level and a certain Jonjo Shelvey played in that 2-0 win against Wales," Blake said.

"We've trained there before an international game at Shrewsbury Town in the past and had great facilities to work with."

And lower-league clubs like Crewe, Leyton Orient and Brighton have staged England youth games in the past year.

Blake said these games are a chance to see potential England stars of the future.

"There are several top players who'll be playing against Finland," he added.

"James Ward-Prowse, who plays for Southampton, is a player with great potential.

"I'm looking at players who could feature in the Euros next year, so every game they play is an opportunity."

England finished top of their Euro qualifying group with wins against Estonia and the Faroe Islands in September.

They now wait to see who they will be drawn against in the Elite round ahead of the European Championships next year.

Listen to full-match coverage of England against Finland Under-19 international on BBC Radio Shropshire 96fm or at bbc.co.uk/shropshire from 19:00 GMT on Tuesday, 13 November.