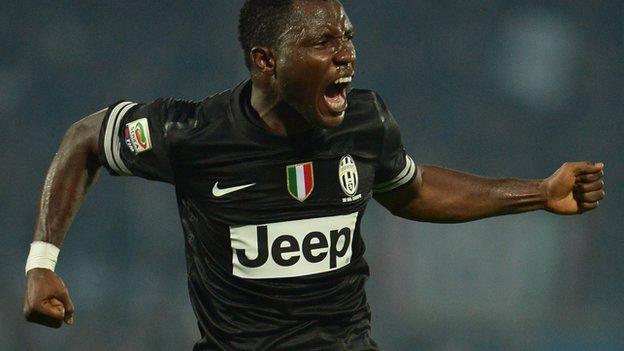 Kwadwo Asamoah scored one of the goals for Juventus as they crushed Pescara 6-1 to stay at the top of the table with a four-point margin. The Ghana striker scored his side's third goal in the 30th minute - his first in two months after 12 games.

Mounir El Hamdaoui made sure of the points for Fiorentina who won their fourth straight game by defeating AC Milan 3-1. The Morocco striker secured the points with three minutes remaining after coming on as a substitute in the 56th minute.

Equatorial Guinea striker Rodolfo Bodipo found the back of the net in added time for Deportivo la Coruna, but his side lost a two-goal lead to lose 5-3 away at Real Zaragoza. Bodipo came on as a substitute in the last eight minutes to score his second goal this season for Depor who lie in the bottom three of the table.

Nancy are stuck at the bottom of the table after losing their third consecutive game 3-1 to visiting side Rennes. Nancy had equalised through Nigeria striker Simon Zenke - scoring for the first time this season - in the 50th minute, but Burkina Faso's Jonathan Pitroipa sealed the game for Rennes with six minutes remaining as he netted in his fourth goal of the season. Cameroon striker Paul Efoulou, failed to reduce the deficit after he missed a penalty in the 82nd minute - four minutes after coming on as a substitute.

A goal by Ivory Coast striker Salomon Kalou just before half-time secured the points for Lille who defeated Brest at home.

Gabon striker Pierre Aubameyang continued his fine form as he scored two minutes to time for Saint Etienne who defeated Troyes 2-0. Aubameyang has scored eight goals in 12 games for Saint Etienne. He is the league's second top scorer with two goals short of Zlatan Ibrahimovic of Paris Saint-Germain.

A goal in each half by the Algeria midfielder Foued Kadir helped Valenciennes to a 3-2 away win at Bastia. It was Kadir's fifth Ligue 1 goal and helped lift Valenciennes to fifth position.

Tunisia defender Aymen Abdennour was on the score sheet for Toulouse who were beaten 4-2 at home by Ajaccio. Mali striker Sigamary Diarra was among the scorers for Ajaccio with his first goal of the league.

Ghana's Andre Ayew gave Marseille the lead in the 40th minute as his side drew 2-2 at home with Nice. However, Marseille have a game in hand and are equal on points with leaders Paris Saint-Germain.

Two African goals, both from the penalty spot, ensured that the encounter between Kasimpasa and league leaders Antalyaspor finished with the two sides sharing the points. Nigeria striker Kalu Uche rescued the home side Kasimpasa by converting from the spot in the very last minute after Morocco's Ismail Aissati had given Antalyaspor the lead 13 minutes earlier.

DR Congo striker Lomana Lua Lua came on mid-way into the second-half to seal victory for Karabukspor who came from behind to beat Istanbul BB 3-1. The Cameroon striker Pierre Webo had given Istanbul the lead after just four minutes of play.

Fenerbahce moved up to third position after a 2-1 victory over Orduspor with Senegal striker Moussa Sow scoring the opening goal in the 11th minute.

Nacional played the last two minutes at Vitoria Guimaraes with 10 men but they had already secured the points mid way in the second-half to win 3-1 after coming from behind. Ladji Keita from Senegal and the Angola substitute Mateus were both on target for Nacional.

Somalia striker Liban Abdi accounted for the only goal of the game in the 29th minute as his side Olhanense defeated Beira Mar. Abdi has now scored four goals in the league.

Hamdi Harbaoui broke the deadlock after 42 minutes to give Lokeren the lead in their 2-1 victory over Standard Liege. After the Tunisia striker celebrated his fourth goal of the league, the South Africa midfielder Ayanda Patosi scored Lokeren's second in the 65th minute to take his tally to six goals.

Senegal striker Mbaye Leye equalised for second-placed Zulte-Waregem in the 73rd minute as they drew 1-1 at home with 10-man Mechelen.

Anderlecht triumphed 6-1 over rivals Club Bruges to remain at the top of the table with the DR Congo striker Dieudonne Mbokani scoring one of the goals in the 33rd minute.

Nigeria striker Ahmed Musa made sure that CSKA Moscow maintained top position after scoring twice as his side beat Kuban Krasnodar 3-1.

Two giants of Greek football, both on extreme opposite ends of the Super League table, met on Sunday for a chance to win some bragging rights. And it was the league leaders Olympiakos who triumphed emphatically with a 4-0 win over rivals AEK Athens, who are languishing at the bottom of the table.

Algeria midfielder Djamel Abdoun scored from the penalty spot to give the visitors the lead in the 23rd minute, and with only 10 men to continue, it was all downhill afterwards for AEK Athens.

Waalwijk won only their third game in 12 league matches after beating Utrecht by a resounding 4-0 score line to climb up to 11th position. Morocco defender Imad Najah was on target for Waalwijk, whose previous victory was back in August.

Ideye Brown scored twice at the weekend for Dynamo Kyiv who crushed Metalurh Zaporizhya 5-0. The Nigeria striker has taken his tally to 10 goals so far to become second-top scorer in the league.

Ivory Coast striker Arouna Kone scored for Wigan but could not prevent them from going down 2-1 to West Brom. Kone got o0n the end of a Jean Beausejour cross to finish from six yards.