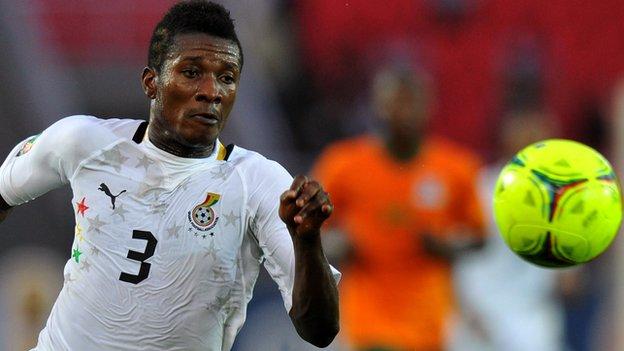 Ghana have call up two replacements for Wednesday's friendly against Cape Verde after the withdrawals of captain Asamoah Gyan and Jonathan Mensah.

UAE-based striker Gyan has been given permission to miss the game in order to join in the one-week celebration of his late mother Cecilia Amoako.

Defender Mensah pulled out of the squad after he suffered a thigh injury while playing for his French club Evian.

Midfielder Afriyie Acquah and defender Lee Addy come in to take their places.

The pair will join the Black Stars camp in Portugal on Monday after they were handed the late call-ups by coach Kwesi Appiah.

The match, which will be played in the Portuguese capital Lisbon, is a warm-up for both sides ahead of 2013 Africa Cup of Nations, which will be held in South Africa between 19 January and 10 February.

The Black Stars have been drawn in Group B to play Democratic Republic of Congo, Mali and Niger - they kick off their campaign against DR Congo on 20 January.

Cape Verde will play the opening match of the tournament against hosts South Africa on 19 January, and will also face Morocco and Algeria in Group A.