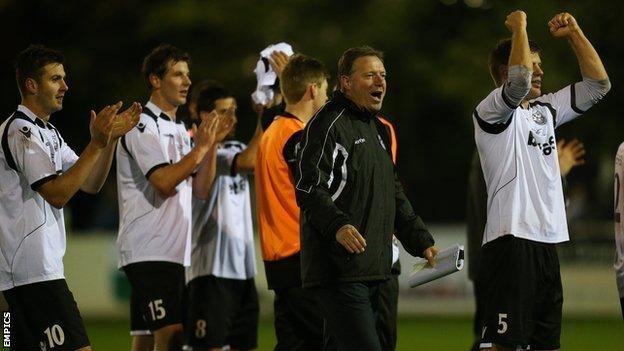 Cambridge City's Spanish midfielder David Prada says the FA Cup has given him an opportunity he would never be able to experience at home.

Non-league City to earn a replay at Stadium MK on Tuesday.

The equivalent competition in Spain, the Copa del Rey, only features sides from the top four levels.

"Coming to England opened doors for me. Playing in the FA Cup is an experience I will never forget," Prada, 27, said.

Cambridge City full-back Tom Pepper on his job as a London black cab driver: "I haven't picked up anybody famous recently, but I did pick up former England manager Fabio Capello once.

"I was trying to have a little conversation with him, to get a few tips and pick up some things on mentality. But he didn't really want to talk to me so I left him alone."

"In Spain we didn't have a chance to play in competitions like this. In Spain it's difficult to reach the Copa del Rey when you play at our level."

Prada joined Southern League Premier outfit Cambridge last season from Spanish club Deportivo Javea, a team with a noticeable British influence because of the number of ex-patriots who reside in the Costa Blanca area.

City had to survive four qualifying rounds before facing MK Dons in the first round proper and battled to a 0-0 draw.

They now go to Milton Keynes in pursuit of a major upset and a place in the second round against York or AFc Wimbledon.

Full-back Tom Pepper, who also drives a black cab in London, told BBC Radio Cambridgeshire: "It's going to be amazing. I can't wait. It's what you play for. The big games, the big stadiums - when you're growing up as a kid it's what you dream of.

"Of course we can win it. You never say never - it's the FA Cup and anything can happen.

"The morale and spirit in the team at the moment is fantastic. We'll go there to work hard on and off the ball and anything can happen."