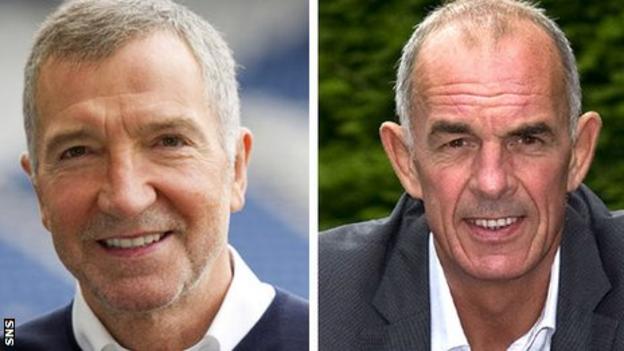 Former Rangers and Liverpool boss Graeme Souness has tipped Joe Jordan to be the next Scotland manager.

Souness told BBC Scotland that Jordan was "a passionate, powerful player" for his country, with coaching experience at the highest level.

Jordan, 60, is out of work after leaving his position as assistant to Harry Redknapp at Tottenham Hotspur in the summer.

It is high in the ambitions of a lot of people

Craig Levein was relieved of his duties on 5 November with Scotland bottom of World Cup qualifying Group A.

Souness ruled himself out of the running and also said Gordon Strachan was a good option to succeed Levein.

"Joe and Gordon are the stand out candidates, but I would go for Joe," he added.

"Joe's an obvious candidate. Everyone knows the passion that Joe showed when he was a player.

Souness had spoken to the Scottish Football Association previously about becoming national manager but said now he is not interested.

Jordan, like Strachan, continues to be guarded about the job other than to indicate that he would consider the post if approached by the SFA.

"It would be a nice thing to happen for someone to come and make that proposal to you," he told BBC Scotland.

"We'll wait and see if that hypothetical situation comes up."

Jordan had been part of Harry Redknapp's coaching team until the Englishman's summer exit from Spurs.

"I'm unemployed and the SFA will look to try to fill the post after the game this week and I think they'll have a number of people earmarked that could be candidates for the job," he said.

"We'll wait and see what happens regarding the decision that they're going to take.

There will be a number of people who have played for the country, or who who are Scottish and not played for their country, who would be interested because it is a very important job.

"It is high in the ambitions of a lot of people."

Redknapp has ruled himself out of the running and backed Jordan's candidature - and the Scot also appreciated the compliments from Souness.

"It is nice to be associated with the job and for someone who I played with to give me that recommendation and speak well of me, it's nice to hear things like that from people in football," he added.