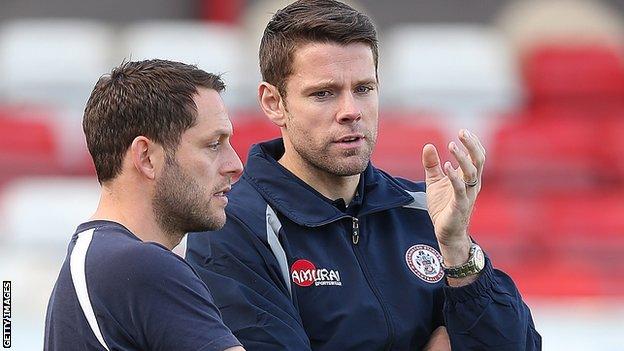 James Beattie is confident that he can still make an impact on the pitch after signing for Accrington Stanley.

The 34-year-old was on Friday.

"Primarily I'm here to do my stuff on the pitch, and then oversee what Leam (Richardson) wants to oversee," striker Beattie told BBC Radio Lancashire.

"The primary objective is to play. That's what I've wanted to do. Unfortunately the opportunities haven't been rife out there."

The former England striker, who has not scored a first-team goal since October 2009, continued: "The market's very tough and there are a lot of pros out of football at this moment in time.

"I saw this as a challenge. The primary objective is to get back playing and get some minutes under my belt, but then if I can help the coaching staff here, who have been great in accepting me, that will be a bonus.

"It's a great opportunity for me to get back playing and to have the first footsteps on the ladder to coaching."

Richardson, who was appointed as manager earlier this month, has inherited a young squad and Beattie is confident he can help those youngsters progress.

"Leam said that the young lads will look up to me," he added. "A lot of them are from Liverpool and there are a lot of Everton fans in there, so the lads will know who I am.

"If they can pick up some good habits from me in the dressing room and around the training pitch, that will be great. I'm here to help them and I'll do all I can to help them."