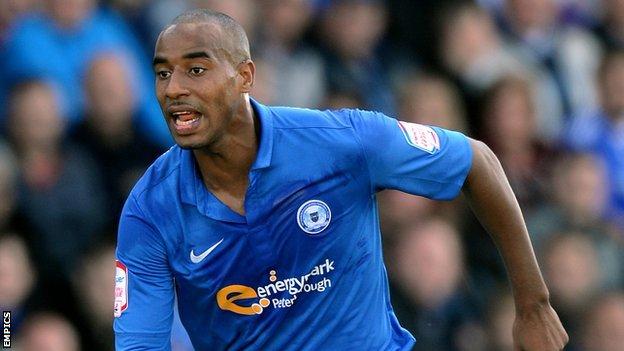 The nature of the breach has not been disclosed but the punishments were imposed after an internal inquiry.

Two of the four players were cautioned by police for an incident in Peterborough city centre in the early hours of Sunday morning.

Police have not confirmed which two players were involved.

A statement on the club's website said: "Peterborough United are disappointed to report that Gabriel Zakuani, Nathaniel Mendez-Laing, Emile Sinclair and Tyrone Barnett have been transfer listed and fined by the football club following an internal investigation into a breach of club discipline.

"The club will be making no further comment on the matter."

None of the quartet started but striker Barnett, a £1m summer signing, did come off the bench as a substitute.

The Democratic Republic of Congo international arrived at London Road from Fulham, initially on loan, in September 2008 and was influential in Peterborough's two promotions to the Championship in the last three years and last season's successful fight against relegation.

But he has not started a game since a 2-0 loss to Wolves on 22 September.

Barnett, 27, the club's record signing, has scored five times in 23 games since arriving from Crawley in February.

Fellow front man Sinclair, 24, has made just five starts this season but scored a hat-trick in a 3-1 win over Hull in September, while 20-year-old winger Mendez-Laing has been restricted to four appearances this term.

Peterborough now have six players available for transfer after midfielder George Boyd and defender Mark Little were listed in the summer for footballing reasons.