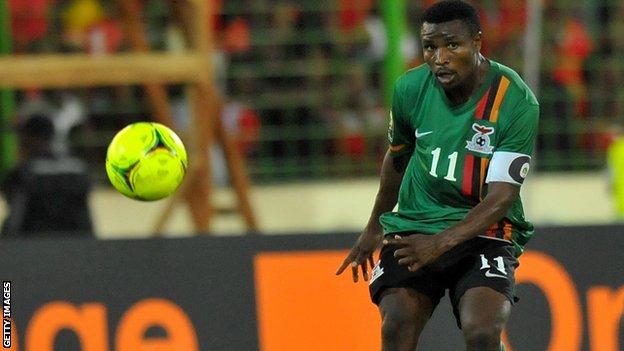 Collins Mbesuma scored the match-winning goal just after the hour.

South Africa, who will host January's 2013 Africa Cup of Nations, started brightly but missed a number of chances in the first half.

"It is only a friendly game, the most important is to be ready for the Nations Cup," said Zambia coach Herve Renard.

Fourteen of the 16 qualifiers for January's competition were in action on Wednesday, with Johannesburg - which will stage the opening match and final of the Nations Cup - hosting one of the stand-out ties.

In the dying moments, Zambia thought they should have won a penalty through Mbesuma while Kermit Erasmus missed a golden chance to equalise for the hosts seconds later.

Bafana Bafana's defeat came after they were guilty of missing a number of chances, with Ricardo Nunes, Bernard Parker and Lerata Chabangu all threatening - but without beating Chipolopolo keeper Kennedy Mweene.

"I think we are very rusty in the sense that we are not playing as team," said South Africa coach Gordon Igesund. "I think we could have done better in certain areas but at the end of the day, it was a good exercise."

"I think we didn't deserve to lose, it was a wonder goal but we need to work on our combinations. I am disappointed we lost, the guys were psyched up but some got tired late on. We know what we have to do. We have 75-80% of the team and now we have to find the other 20-25%.

"We weren't good enough in certain areas and we didn't create enough chances. We need to get more comfortable as a team. We haven't started to become a team - a unit - yet."

In other matches on Wednesday, Angola were held to a 1-1 draw by Congo in Estoril, Portugal, while Tunisia lost 2-1 at home to Switzerland after the visitors, who missed a first-half penalty, scored deep into injury time through Xherdan Shakiri.

Algeria were also undone by a last-minute strike, as Bosnia beat them 1-0 thanks to another stoppage time goal.

Earlier, Burkina Faso won 1-0 in El Jadida, Morocco as they beat a DR Congo side whose fortunes have been revived under coach Claude LeRoy.