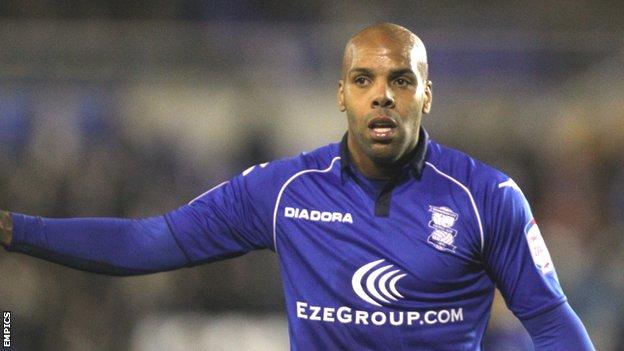 The 32-year-old has scored five goals in his last five matches, including one in Saturday's 1-1 draw with Blackburn.

"He [King] is on a little bit of a roll - he's scoring all kinds of goals at the moment," Clark told BBC WM.

"He's getting tap-ins which are brilliant for strikers and some terrific finishes, so he's performing very well."

The Blues currently lie in 19th place in the Championship, and are on a run of one defeat in their last six league games.

And former Huddersfield boss Clark believes that the central midfield partnership of Hayden Mullins and on-loan Ravel Morrison has also been crucial in his side's recent run of form.

"I think the combination between Morrison and Mullins is developing all the time," Clark explained.

"Hayden is looking after young Ravel in there and I think Hayden is playing his best football for the club - in the last five games he's been outstanding.

"What I'm liking about Ravel is his work ethic, he's doing all the stuff that a modern central midfielder has to do.

"It might be a coincidence but we've certainly started to play better since he has come into the team."

Meanwhile, Leroy Lita has left St Andrew's and gone back to parent club Swansea, bringing to an end an injury plagued loan spell with the Championship side.

Birmingham have "not ruled out" the possibility of the 27-year-old returning to the club once his injury problems have subsided.