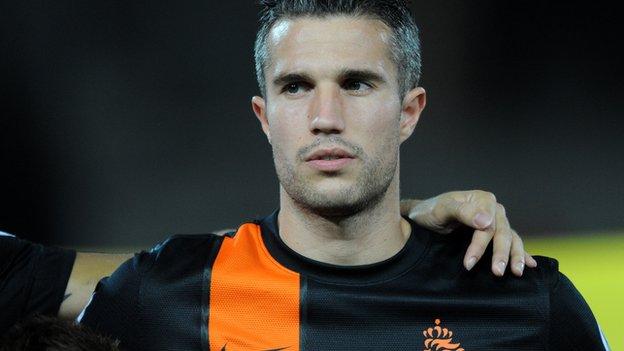 Robin van Persie has withdrawn from the Netherlands squad for Wednesday's friendly with Germany with an injury.

The Manchester United striker, who played the full 90 minutes on Saturday as they came from 2-0 down to beat Aston Villa 3-2, has a thigh problem.

Wesley Sneijder (thigh) will also be absent for the Dutch.

Germany will be without Bastian Schweinsteiger, Toni Kroos and Jerome Boateng, Miroslav Klose and Mesut Ozil because of illness and injury.

Van Persie's place in the Dutch side is likely to be taken by Klaas-Jan Huntelaar, while RKC Waalwijk goalkeeper Jeroen Zoet, Wolfsburg striker Bas Dost and Feyenoord trio Jordy Clasie, Ruben Schaken and Stefan de Vrij have been added to the 23-man party.

It comes after four of the players on coach Louis van Gaal's list, Roma goalkeeper Maarten Stekelenburg, PSV Eindhoven's Jeremain Lens, Luciano Narsingh and Kevin Strootman - were not deemed fit enough to be included in the full squad.