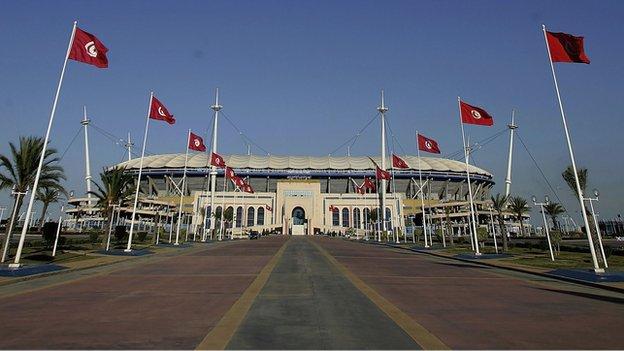 Fans will be allowed inside the Rades Stadium in Tunis on Saturday for the second leg of the African Champions League final, but capacity is to be restricted.

The authorities, fearing crowd trouble, have opted to sell only 35,000 tickets for the showdown. Rades can hold 65,000.

Tunisian spectators have been allowed to watch internationals and some Champions League group games but all league matches last season were played inside locked stadiums after a spate of stadium violence.

Home side Esperance are poised to take the title for a second successive year. They drew 1-1 with Ahly of Egypt in the first leg in Alexandria.

The 'Arab Spring' took hold in Tunisia almost two years ago and restrictions remain in place at football matches amid fears that large crowds represent a possible springboard for civil unrest.

Officials said the interior ministry had planned to allow 27,000 tickets to be sold but that number has been increased after complaints from the Confederation of African Football, which is keen to ensure its showpiece final is played against a backdrop of a noisy and excited crowd.

Crowd violence has been a regular occurrence at Champions League finals over the last decade, including at Rades.

At the 2010 final, Esperance fans threw missiles onto the pitch during the game and then disrupted the post-match presentation ceremony after their team had lost.

Last year, teargas was fired by police to stop fighting between Esperance supporters and fans of beaten finalists Wydad Casablanca of Morocco.

And in August, Tunisia's other representatives in the Champions League, Etoile du Sahel, were kicked out of the competition after rioting fans caused the abandonment of a group match.