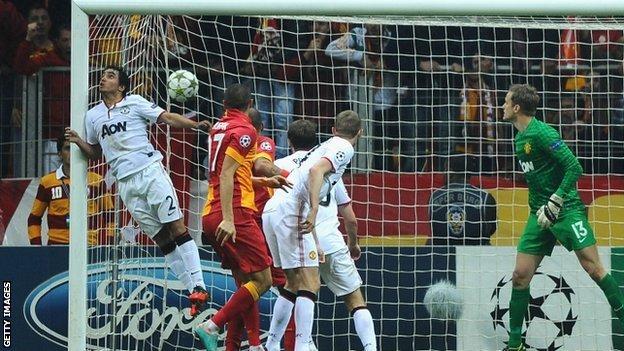 Manchester United lost their 100% record in the Champions League this season with defeat at Galatasaray.

Striker Burak Yilmaz scored his fifth goal of the group stage early in the second half when he leapt highest to head in from a right-wing corner.

The home side created the best chances, with Anders Lindegaard saving from Yilmaz and Hamit Altintop, who also saw a shot rattle the United woodwork.

Teenager Nick Powell had United's best chance when his header struck the bar.

With Cluj beating Braga, it was essential for Fatih Terim's side to secure victory over the three-time European champions.

Those two sides have seven points and are both vying for second spot, while United remain on 12 points, having already won the group.

With qualification for the last 16 secured and having left several senior players at home, this encounter gave Sir Alex Ferguson the chance to see if the next generation could cope in an intense atmosphere.

Of particular interest to some United fans would have been the performance of those competing for a spot in central midfield.

Long-serving United pros Ryan Giggs and Michael Carrick looked leggy against Norwich in last weekend's 1-0 defeat, with Ferguson bringing on a 38-year-old - in the form of Paul Scholes - to try to remedy the situation after his side fell behind.

Giggs and Scholes are the burning embers of what remains of the golden midfield that helped the club achieve its successes of the last 20 years.

The two players touted to lead the new generation of midfielders - Tom Cleverley and Powell - started at the Turk Telekom Arena.

Cleverley, 23, has seized his chance this season and produced a steady, if unspectacular performance, in Turkey, but alongside him was a player five years his junior trying to show his manager that he has a long-term future at the club.

Powell, who scored for Crewe in a 2-1 win against Morecambe a year ago yesterday, was excellent on his first Champions League start.

He seemed to forge a good understanding with forward Danny Welbeck, coped well with the physical presence of Brazilian powerhouse Felipe Melo and came closest to scoring for the Red Devils when his header came off the woodwork.

United's other opportunities were merely half-chances, with the starting XI - with an average age of 24 - on the back foot for much of the match against a side fighting for their Champions League future.

Melo was impressive in midfield, although he was lucky not to get punished for some rough early tackles, while Yilmaz and the fantastic winger Nordin Amrabat were a constant threat in the final third of the pitch.

Yilmaz, who has scored all of Galatasaray's goals this campaign, forced a great stop from Lindegaard, although the Turk should have scored when he failed to make a connection with a cross from three yards out.

Turkey international Altintop once again showed his potency from distance, forcing another great save from Lindegaard, before smacking the underside of the bar in the second half with a venomous effort which Lindegaard got a slight touch to.

United coped well with much of what was thrown at them, except for the one moment shortly after the restart when Yilmaz leapt ahead of team-mate Melo to head in the only goal of the match.