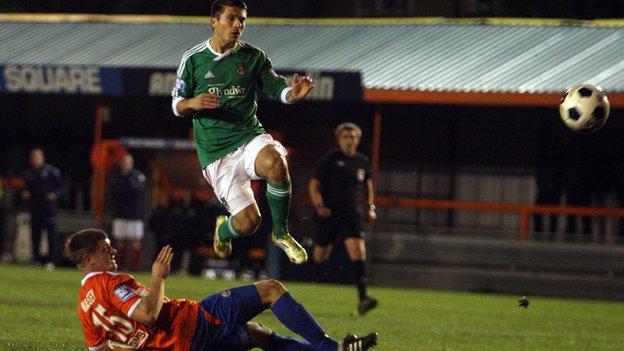 Wrexham leap-frogged Newport to move into second place in the league table with a comfortable win at Braintree.

Danny Wright opened the scoring with a fine effort from 25 yards before turning provider for Brett Ormerod.

Wright then got on the end of Ormerod's cross for 4-1 before Adrian Cieslewicz sealed the rout from 18 yards.

Grimsby are top on goal difference and Newport are third, with all three teams on 36 points. Both Welsh clubs have a game in hand over Grimsby.

"It's really disappointing. We weren't good enough. It was men against boys, they either grow up or move on.

"It will change. I won't be sitting around. I tried to get someone in before today's game. I'm talking to a lot of other clubs.

"It's the first time we've had a hiding like this at home, it hurts. We've got to roll out sleeves up and get on with it.

"We can't lay too much into them, I don't want their confidence going, we knew it was going to be a difficult season."

"Braintree have had a few games in the past few weeks and tough games, and on this pitch it's quite heavy on the legs so I think we got them at quite a good time.

"But take nothing away from our performance, we were good. Just miffed that we've let another goal in.

"I'm pleased. It's a difficult place to come on a Tuesday night, but we did it properly, we prepared, and we've reaped the rewards."