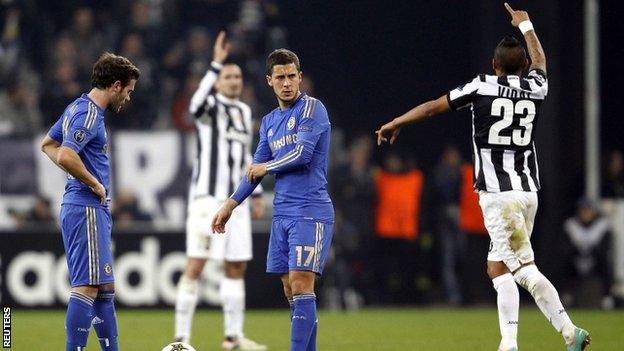 Chelsea were left on the brink of an ignominious exit from this season's Champions League after a comprehensive defeat at the Stadio Juventus in Turin.

With time running out, Sebastian Giovinco beat the Chelsea goalkeeper to the ball to prod in from 30 yards.

If Roberto Di Matteo arrived in Turin facing speculation over his own future after four Premier League games without a win, this defeat threw up far more questions than it did answers.

The permutations do not make pleasant viewing for Chelsea, who know that even victory in their final group game FC Nordsjaelland at Stamford Bridge may not be enough. If Juventus take a point against Shakhtar Donetsk, who have already qualified for the knockout stages, Chelsea are out.

The questions facing Di Matteo are likely to multiply in the days ahead. Some will centre on Fernando Torres, whose Chelsea career plumbed fresh depths as he was left on the sidelines until the 70th minute, even with his team-mates chasing the goals that might have breathed hope into their Champions League campaign.

The majority, however, will centre on Di Matteo's position and owner Roman Abramovich's infamous lack of patience - with Premier League leaders Manchester City due at Stamford Bridge on Sunday.

Chelsea managers have had their fate decided in an Italian cauldron before, of course.

to prolong his tenure. Tonight it was Di Matteo's opportunity to ease the growing scrutiny surrounding his position.

There were 11 internationals in Chelsea's starting line-up, but there was none of the solidity that became their hallmark during last season's European triumph. John Terry, Frank Lampard and the departed Didier Drogba were nowhere to be seen, instead the onus fell on the new generation in the most testing of environments.

Before kick-off, the home support unfurled a banner carrying the words 'after Italy we'll take Europe' and it didn't take long to see why there was such confidence in the stands.

"Chelsea lacked character and presence. They need to find replacements for John Terry and Frank Lampard, who are coming to the end of their careers, and they need to replace Didier Drogba with a striker who will work hard. They have been left with just Torres and that makes things difficult."

More often than not, the danger stemmed from Andrea Pirlo, who tormented Chelsea's back line all night. The onslaught started in the third minute, when Stephan Lichtsteiner ghosted onto Mirko Vucinic's clever far-post cross, only to be denied by Cech with the help of the post.

Cech was on form and, with Gary Cahill and David Luiz at risk of being overwhelmed, he had to be. The Chelsea goalkeeper fielded a Pirlo free-kick as well as shots from Vucinic and Quagliarella, with the visitors' only respite a mazy run by Oscar that led to a fierce low shot from Eden Hazard, which Gianluigi Buffon deflected wide.

Soon after, Ramires dribbled through impressively, only for Oscar to see his goal-bound shot blocked but things were beginning to look ominous for Chelsea and seven minutes before half-time they fell behind. Pirlo ambled forward and unleashed a low shot, which appeared to pose little danger until it took a wicked deflection off Quagliarella to wrong-foot Cech and roll into the net.

Chelsea came within an inch or two of falling further behind a minute later, as Luiz deflected Kwadwo Asamoah's cross towards his own goal, only for Ashley Cole to clear the ball off the line. But from that moment, Di Matteo's side surged forward and might have had an equaliser, only for Juan Mata to miscontrol Hazard's right-wing cross.

Juventus started the second half with more purpose. Vucinic was denied a penalty after appearing to be held back by Cahill as he prepared to shoot.

The Italian champions were beginning to look like scoring every time they crossed the halfway line. Cech denied Pirlo and then Quagliarella in the space of a minute but a smaller margin of defeat would have flattered Chelsea and, on the hour mark, Juventus struck again.

Moments after Victor Moses replaced Cesar Azpilicueta, Vucinic found Asamoah wide on the left flank and the Ghanaian's clever cutback was fired goalwards by Vidal, only for another cruel deflection to beat Cech once again.

Torres was thrown on but Chelsea never looked like a genuine threat. Juventus broke forward once again and when Cech charged off his line and out of his penalty area in a bid to hack clear a through-ball from deep, substitute Giovinco was able to beat him to the ball, prodding it past him to add salt into an already raw wound.