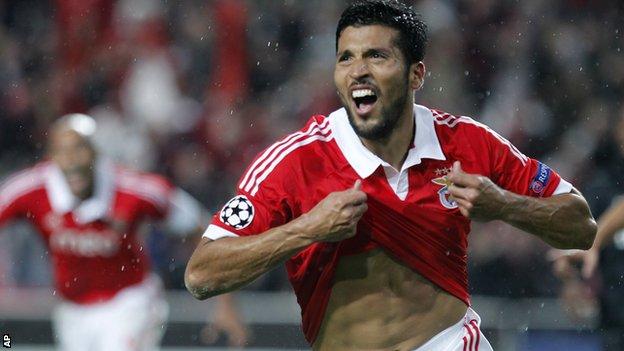 Celtic missed out on an opportunity to clinch qualification to the Champions League knockout stage as they suffered defeat in Lisbon.

Benfica took an early lead when Ola John lashed the ball into the net from eight yards.

The Portuguese side pummelled Celtic in search of a winner and it came through Ezequiel Garay, who volleyed emphatically past Fraser Forster.

The result, undeniably a just one, is by no means catastrophic for Celtic, who can still reach the last 16 if they gain more points than Benfica in the final round of matches.

Neil Lennon had underlined the difficulty of the task facing his side in the Estadio da Luz and the pattern of the match proved the Celtic manager correct.

Celtic were given a first-minute warning of the importance of ball retention as Samaras was robbed inside his own half, allowing Oscar Cardozo a sight of goal, but the Paraguayan's drive flew too high.

It was another lapse that cost Celtic the opening goal. Adam Matthews mishit his clearance in the left-back position and Eduardo Salvio was quick to pounce, firing the ball into the six-yard box.

Cardozo touched it back to John, who hammered it beyond Forster.

That set the tone for the opening period, as Benfica sprayed passes left and right, with Salvio and Lima displaying fantastic individual skills.

It took Celtic until around the 20-minute mark to settle and begin to come to terms with the Portuguese side's superb movement.

Celtic almost contributed to a second Benfica goal after half an hour as Salvio latched on to a short Kelvin Wilson pass, beat Victor Wanyama in a 50-50 before slipping in Cardozo, who should have done better than to hit the side-netting.

And, incredibly, with their first attempt on goal, Celtic equalised moments later in familiar fashion.

Mulgrew swung in a deep corner kick from the right and the unmarked Samaras nodded into an empty net from little more than a yard out.

Benfica looked flattened by that turn of events, although they showed their class again just before the break as Cardozo, Lima and Salvio combined to set up John, but Forster's left leg denied him a second goal.

Lima, playing just behind Cardozo, continued to dazzle Celtic at the outset of the second half and, after he had skinned Efe Ambrose on the left of the box, his shot beat Forster, but there was Matthews on the line to atone for his error at the first goal.

Forster made a comfortable save - again from Lima - following a defence-splitting pass by Nemanja Matic, before Salvio somehow failed to connect with the ball six yards out and with the goal at his mercy.

In truth, Benfica's second goal was coming and, when it did, it arrived with some style.

Luisao, still upfield following a corner kick, headed the ball into the path of his central defensive partner, Garay, who thumped a volley past the keeper from eight yards.

Wanyama almost produced an immediate response, but Artur got down to push his curling effort away, setting off a Benfica attack that culminated with Salvio hitting the bar with an audacious drive from 30 yards.

Forster saved superbly from Cardozo twice, while Celtic's only chance in the closing stages to grab an equaliser was a weak effort by substitute Tony Watt.

So it all boils down to the final matches in the group, with Celtic unable to call upon Wanyama for the visit of Spartak, the midfielder having picked up a booking to earn him a suspension.