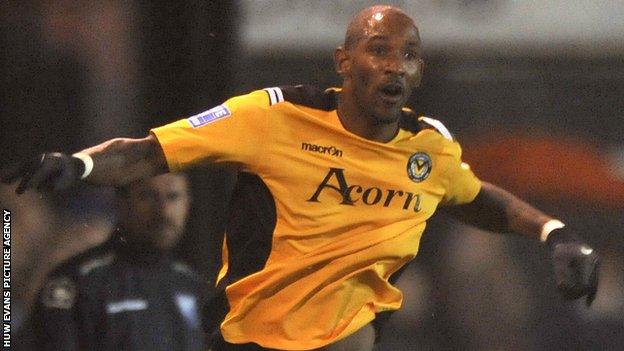 And manager Justin Edinburgh has confirmed that two players have joined on loan until January.

Anthony was poised for a permanent move to Newport, but chose Gloucester who then loaned him to Edinburgh's team.

"Byron will go stright into the squad for Saturday and will be pushing for a strarting place," said Edinburgh.

"Christian gives us good pace. He's played in the Football League... and he'll give us good balance wide in the front areas."

The former Spurs star confirmed that there had been interest in all three transfer-listed players.

"Some of them might go through before the weekend or perhaps early next week if they [the players] decide it's the right thing for them," said Edinburgh.

Charles and Louis were summer signings, while Harris joined from Weston-super-Mare last season.

Only Louis, 33, has been used regularly this season, but the nomadic striker has failed to score since finding the net in the opening two games.

The three forwards have been made available as permanent or loan signings.

Edinburgh is keen to trim the squad to make way for potential new signings during the January transfer window.