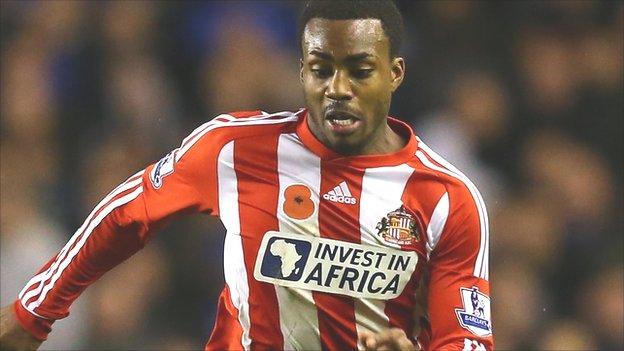 Sunderland defender Danny Rose believes his performances have been good enough to warrant his place in the first-team at the Stadium of Light.

Although restored to the side for Saturday's 2-1 defeat at Everton, Rose was left on the bench for the 1-0 loss against Aston Villa the previous week.

"I was disappointed. I don't know why I was left out," Rose told BBC Newcastle.

"I do feel like I'm playing well but I'm back in the team now and I'll do all I can to stay in."

Danny Rose's full debut at Tottenham in April 2010 saw him rocket a 35-yard volley past then Arsenal goalkeeper Manuel Almunia to help Spurs to a 2-1 win against their fierce rivals. The Doncaster-born utility player joined the White Hart Lane club in July 2007 from Leeds United.

The 22-year-old, who is on loan at the Wearsiders from Tottenham Hotspur, has made eight starts so far and featured in seven of 10 league matches.

Adam Johnson's strike broke a five-match run without a goal from a Black Cats player in what, despite the loss, was an improved display.

"It's the best we've played since I've been here and hopefully we can take what we've done well here against Fulham," Rose added.

"Playing well and getting nothing from the game is no good to anybody. We need three points and that is vital.

"We've got to remain positive, we can't go into our shell, we need to be fighters.

"The captain Lee Cattermole is one of the great fighters I've ever seen and he won't let anyone hide."