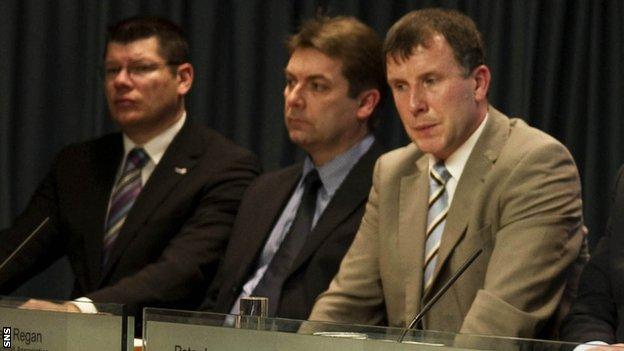 The battle lines were drawn months ago and the main players have been digging the trenches.

But listen closely and you will hear the first volleys being fired as Scottish football edges closer, yet again, to civil war.

No man's land appears to be a strip of light blue, slightly worn carpet on the sixth floor at Hampden.

After a few clashes around the water cooler, this time it could be a fight to the finish.

At stake? The power to rip up the crumpled map of Scottish football and start all over again.

Since the top clubs broke away from the Scottish Football League back in 1998, the Scottish Premier League has been kingmaker.

It has called the shots on issues such as broadcasting deals, sponsorship and league set up.

Some of those left behind called it a cabal, a cartel set up purely to look after the interests of individual clubs rather than the good of the Scottish game.

The success of the SPL is open to debate, but what is certain is that those at the top have enjoyed over a decade of unchallenged dominance - until now.

Since Scottish football's summer of discontent and Rangers' rebirth in Division Three, the underdogs are biting back.

And, with Rangers in their camp, they feel empowered and ready to take on the big boys.

But can they win? The evidence of their confidence comes in the shape of firm proposals for change that appear to be a direct challenge to the SPL.

It wants to inject fresh revenue and interest by having Celtic and Rangers reserve sides - so called "colt" teams - involved.

Plans are also being put forward that would see the introduction of a pyramid system and play-offs.

For the plans to work properly, the 1998 breakaway deal would have to be ripped up.

So what chance is there that the big boys will shuffle back across the corridor with their tail between their legs?

The answer? Little chance. Sources within the SPL and sources at senior clubs say the plans will come to nothing.

Its voting structure - 11-1 is the smallest possible majority for change - will veto any notion of power being taken away.

And so to the counter attack. The SPL says that discussions are already under way aimed at creating a 16-team league of its own.

Also on the table is an "SPL2" with two leagues of 12, which would effectively swallow up the SFL.

It believes a 16 is more likely because pressure from broadcasters to deliver four Old Firm games a season has now gone.

There may even be a show of hands at a meeting early next month.

But, for either plan to work, ground must be given. So will SFL clubs jump ship and join the big boys?

Or can the SFL, led by Rangers, force change of its own?

At the heart of it all is cash and a desire to get turnstiles ticking once again, so easing the pressure on the bottom line.

Fans are sceptical, though, and point to months of fruitless discussions as a reason why the current talks will once again end in deadlock.

Those who are vocal on the subject say the current format is boring, arguing that familiarity breeds contempt.

The popular option appears to be either a 16 or an 18-team league with play-offs.

So will those voices now be heard?

Chairmen and chief executives across the country now openly admit that teams facing each other at least four times in one season is turning fans off.

They will also tell you publicly that change is a must if the game's battered reputation is to be restored. Knowing that change is needed is one thing, but pushing it through in Scotland is quite something else.

The backdrop to this, though, is one of deep suspicion on both sides, with relations between the governing bodies at an all-time low.

Fingers are still being pointed in the Southside of Glasgow over how the Rangers situation was handled.

Some SPL clubs believe the SFL failed to deliver on promises to get Newco Rangers into Division One.

Further down the leagues, club chairman still feel bruised by what they say was bullying by the SPL to sort the situation out.

Add to the mix a Rangers who still feel betrayed by the SPL and who would love to create their own power base for change.

Might it step in and play peacemaker as the unruly children squabble over the toys again?

For now, that seems unlikely. The SFA will, most likely, watch with interest to see who wins before moving in to pick up the pieces.

Just as Scottish football was catching its breath - the battle is on once more.