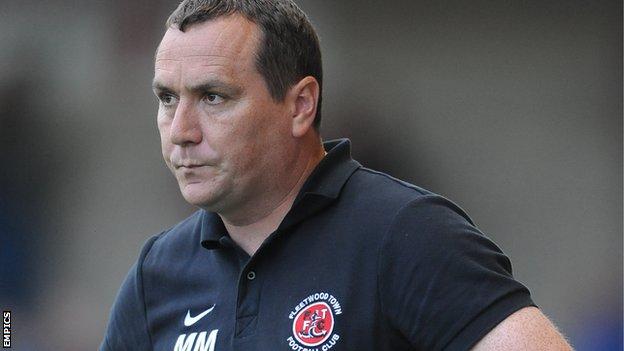 Fleetwood Town boss Micky Mellon says he is weighing up whether or not to bring in a striker on loan.

The Cod Army played one up front in the after injuries to Jon Parkin, Andy Mangan and Steven Gillespie.

"I don't know if we'll get them back in the short term," Mellon told BBC Sport.

"Me and the chairman and the scouting staff are working hard to try and bring in the right type of player to play up there and maybe help us out."

He continued: "I've got a fantastic scouting staff and we always plan for this.

"We'll make sure that the person that comes in, if we decide to do that, is right."

The 34-year-old and says he would

Mellon says Ferguson's impact on the team has been excellent.

"At the end of the day sometimes top players make managers look very good and he's certainly in that category," he added.

"He's an absolutely top drawer player and top drawer guy and we're delighted to have him at Fleetwood and we just want to keep picking up points with him in the team.

"He's an honest guy and an honest footballer and he wants to go round and make sure he earns his wages. A manager can't have enough of those sort of players in his group."