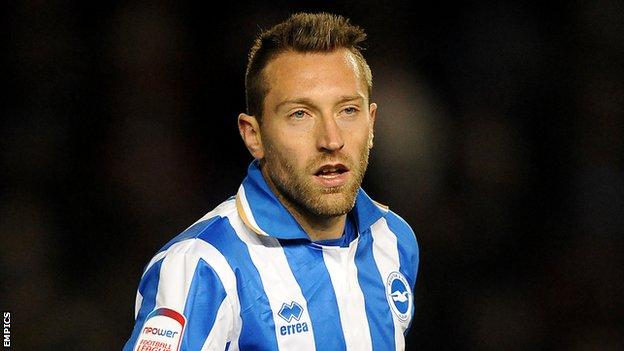 Brighton forward Stephen Dobbie says winning promotion this season is his focus rather than gaining international recognition with Scotland.

The 29-year-old is yet to receive a call-up for his country.

He told BBC Sussex: "I'll never say never but the most important thing for me is playing in the Championship and trying to win promotion.

I now really feel part of the team and settled, fit and healthy. It's a matter of doing the business and staying in the team

"To play in the biggest league is the greatest honour. That is the main priority just now."

He added: "It [playing in the Premier League] changes a lot of lives - the fans, the town and the players themselves."

The former Swansea and Blackpool player believes his chances of a first cap for Scotland could be boosted by the departure of manager Craig Levein.

"You've got to win games, especially at that [international] level, and I think past managers have also had it hard," Dobbie said.

"With the players Scotland have got, they maybe should be winning more games.

"We'll see who comes in and hopefully if I'm playing well, I can maybe break into it."

Dobbie has scored two goals in 11 appearances for Brighton since his deadline day move from Swansea City, and he is confident the side will competing for promotion to the Premier League come the business end of the season.

Brighton have only won once in their past nine games but currently sit three points off the Championship play-off places.

"Maybe we should have had a few more points than we have.

"But I've seen in the past with teams I've played for that it's more important to still be in it around February or March.

"If we keep our identity I think we'll be up there near the end."