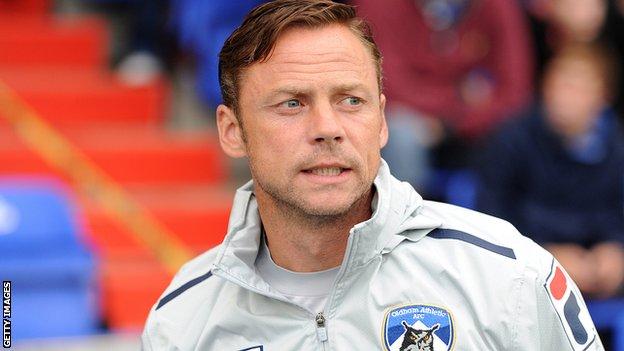 Oldham Athletic chairman Simon Corney says he still has faith in manager Paul Dickov, but is worried by the club's current position in League One.

The Latics are 19th in the table and lie a point above the relegation zone.

Corney told the club website: "There comes a point when you need to look closely at what's happening.

"We are being dragged into a relegation battle. It is a concern to me and I don't want to get into a situation where it's too late."

He continued: "I still have faith in Paul, but we definitely have to sort some things out.

Nobody puts pressure on me more than myself. I desperately want to win games. I love being here and I've got a good group of players here.

After a slow start to the season, Oldham went on a run of six league games from which they collected 11 points and lost just once.

But successive home defeats by and have seen Dickov's side drop back down the league table.

Corney, who was particularly critical of the performance in the loss against the Shakers, says he is happy with the strength of the Oldham squad and believes they are simply not performing.

"At the moment, if we're honest with ourselves, where do we need a new player?" he added.

"On paper, this team is not a bad team. If you said to me 'who would you like to replace in the team?' I honestly couldn't tell you. I don't think it's a question of bringing in new players."

Dickov, who was appointed in 2010, has guided Oldham to finishes of 17th and 16th in his two full seasons in charge.

"Me and Simon get on really well," the former Scotland striker told BBC Radio Manchester after Saturday's game with Tranmere.

"He's the owner of the club and when he doesn't think that we're playing well, he likes to come out and say so. I'll accept that and keep my thoughts to myself.

"Nobody puts pressure on me more than myself. I desperately want to win games. I love being here and I've got a good group of players here."