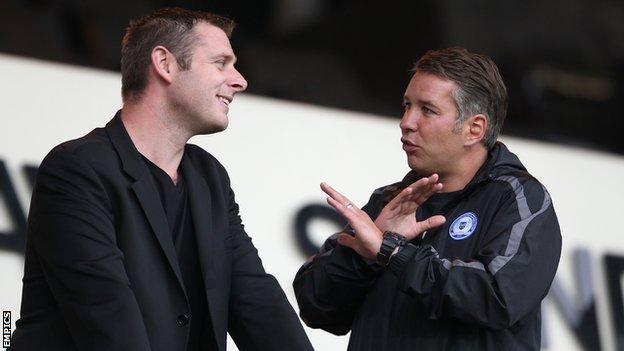 I'm hurt its come to this as we have made a lot of history in the past five seasons and I love the club to bits, sorry to all my fans

Two of the players were cautioned by police in Peterborough city centre in the early hours of Sunday morning,

"I am fully behind the gaffer on his course of action," MacAnthony tweeted.

Police have not confirmed which two players were cautioned.

Only Barnett had featured in on Saturday afternoon, a result that left them 23rd in the Championship table.

"I give blood sweat and tears for the Posh and invest no matter what," MacAnthony added.

"Personally have helped players out many times through tough times so when our club's back is to the wall, have been well beaten at home again, I need my lads to show some common sense, humility, class & stay focused on battle in hand.

"If they can't be trusted to do that, then Posh will be stronger without them going forward. Harsh but true!"

Club captain Zakuani, 26, who has played 160 games in four years at Posh, said he was "hurt" by the club's decision.

He also gave his response on Twitter, saying: "I went out on a weekend where there's no midweek game, those that know me know I don't drink or smoke, I was up at 8am for church next day.

"Honestly at the time I didn't feel I did anything wrong as I was home around 2am, I wasn't arrested, no fighting or anti-social behaviour.

"I understand the club are not happy as we are at the wrong end of the table and I have nothing but total respect for the gaffer and staff.

"I'm hurt its come to this as we have made a lot of history in the past five seasons and I love the club to bits, sorry to all my fans.

"I hope it gets resolved one way or another, and I'm 100% committed, and never will give less than that."