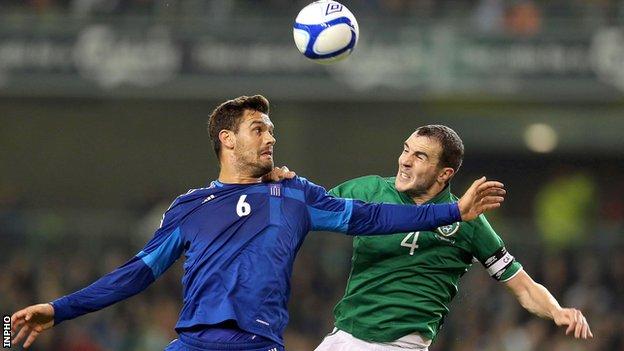 Republic of Ireland captain John O'Shea said his team were punished for failing to make their early dominance pay as they were beaten by Greece in Wednesday's friendly in Dublin.

The Irish had a strong penalty claim turned down and Simon Cox missed a chance before Jose Holebas's winner.

"The way we started the game we probably deserved to be ahead but credit to Greece," said O'Shea.

"Performance-wise, it was much better than the Germany game."

Sunderland defender O'Shea agreed that he had been partially at fault for Holebas's winner although James McCarthy also appeared to be slow to react as Georgios Samaras and Konstantinos Mitroglou combined to set up the Greek striker.

"For the goal I should have done better," added the Irish captain.

"I let him come off just too easy but I think we should have been a couple of goals up by then. (And) we had the penalty shout early on.

"In the second half we probably could have done things a little quicker and better in the final third to create more clear-cut chances."

Despite the defeat, O'Shea took encouragement from the display and the efforts of youngsters such as man of the match Seamus Coleman, Ciaran Clark and James McClean.

In the first 20 minutes, we played very, very great football

"We should have really liked to score a couple of goals tonight but I think the youngsters that came on got more experience."

"I thought we played very well. We passed the ball very well at times and we're just disappointed to get nothing from it," said the defender.

Like O'Shea, Coleman was convinced that Greek defender Konstantinos Stafylidis had handled in his own area in the first minute.

"I thought it was a stonewall penalty," added Coleman.

"The result gives us great disappointment but the performance gives us possibilities," said the Republic manager.

"It gave us confirmation of what we were looking for.

"Coleman, McCarthy, [Shane] Long and also McClean, they confirmed against a great team - because Greece are a great team - their quality and their personality, and that was important.

"In the first 20 minutes we played very, very great football. We conceded the goal and even then, we still had more possession.

"It was very important to have a good performance after the disappointment against Germany. You can see a progression."