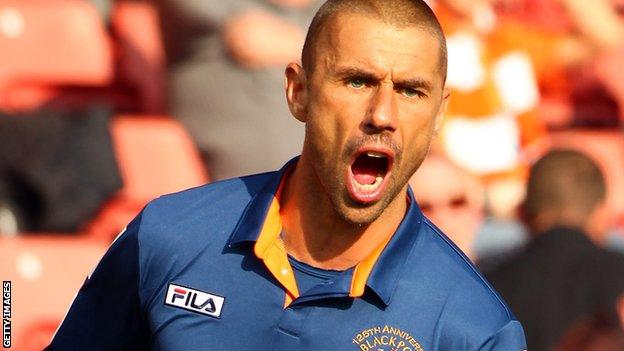 He provided Blackpool's second equaliser for Nathan Delfouneso with his first touch on Saturday.

He's one of the best finishers I've ever worked with

"He'll be invaluable to us in terms of what he can do off the bench," Appleton told BBC North West Sport.

"To be fair to him, he looks fit enough and if I know him, he'll be pushing to get a starting place. I worked with Kevin at West Bromwich Albion and he's one of the best finishers I've ever worked with."

Phillips scored 17 goals in his first season at Blackpool as the Seasiders reached the play-off final in May.

At 36, Appleton is three years younger than the former Sunderland and England striker, who has already revealed that he will

Appleton's playing career was cut short by a serious knee injury in 2003.

"If I was still able to play and my knee was fine, I'm sure I still would have been playing," he added.

"We all have different paths and mine wasn't to be a footballer to the age of 35, 36 and beyond."