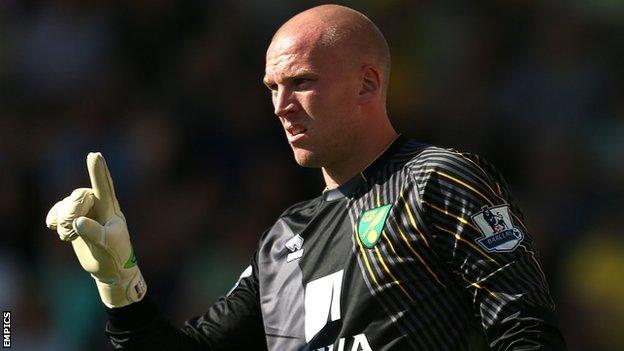 The Canaries have only conceded once in their last four Premier League games, compared to 17 in their first seven.

"I think that was something the manager wanted to change straight away," 26-year-old Ruddy told BBC Radio Norfolk.

"I think you saw in the first six or seven games, it took a while to get used to that."

was Norwich's first top-flight clean sheet away from home since October 2004, when they played out a 0-0 stalemate at West Brom.

Under Paul Lambert last season, the Canaries did not achieve their first shut-out until January - a goalless draw at Chelsea - and only managed two more in the entire campaign.

Hughton has already kept four teams at bay in his first season in charge, but is two points worse off than Lambert's side were this time last term.

Despite that, Ruddy said: "If you can build from the back and keep clean sheets, we're certain we'll win more games than not because we know we can score goals.

John Ruddy donates his Norwich City clean sheet bonuses to Help for Heroes - a charity helping those who have been wounded in Britain's current conflicts.

"If you come to places like Reading, who will be around us, and keep clean sheets at home to Stoke, West Ham and Arsenal, you'll get at least a valuable point."

Ruddy is in Roy Hodgson's England squad for Wednesday's friendly in Sweden and is confident of adding to his one international cap.

"I'd like to think I'd be in contention," he said. "It's just an honour to go away with England and represent my country if given the chance.

"It's one I'll look forward to. Working with the players and management there is exceptional."