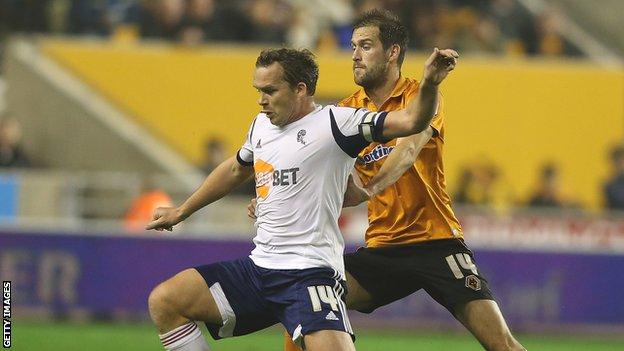 Captain Kevin Davies is confident that Bolton Wanderers can force their way into the Championship's top six under new manager Dougie Freedman.

Bolton, who are 17th and seven points from the play-offs, are unbeaten in three games

"I'm confident we can get the points we need to catch up with the other teams and, come the back end of the season, be in the play-offs," said Davies.

"It's going to be tough for us but we've got the squad to do it."

Speaking to BBC Radio Manchester about the impact that Freedman has made since replacing Owen Coyle, the one-time England striker added: "You can't help but be impressed with the way he's come in and conducted himself.

"We're unbeaten under him. We haven't had a great start but we're still confident that we can put ourselves in the mix for promotion.

"It's still early days and it's going to take the boys a little while to adjust, but it's all looking positive."

On-loan defender Stephen Warnock echoed his captain's thoughts, adding: "There's a lot of football to be played between now and Christmas.

"If you get yourselves in a good position, you can have a right good go at it.

"You only have to look at Reading and what they did last year," continued the former England left-back. "I don't think they were anywhere near at this stage of the season and then they put a fantastic run together.

"We know we're capable of putting a run together but it's just putting it into place."