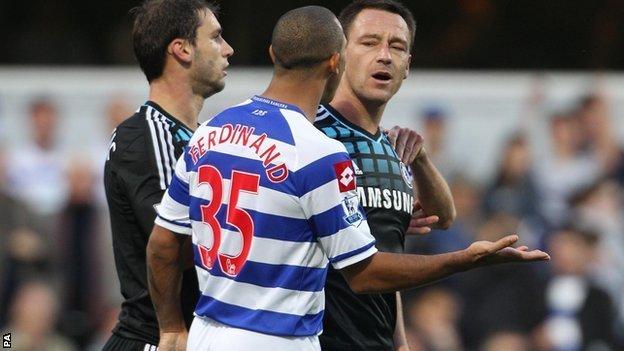 Who'd be your footballing Newcomer of the Season? Who has sprung from relative obscurity to outright celebrity?

No doubt the likes of Michu, Santi Cazorla, Kevin Mirallas and Raheem Sterling would all receive plenty of votes.

But surely none has had a greater, more sudden impact on the current footballing landscape, nor inspired as many column inches in newspapers, than a certain Peter Herbert.

It's unlikely that Herbert is too bothered by all the criticism he's received. This is, after all, one of the leading human rights lawyers of his generation, one of a very small number of black judges, a veteran of 30 years' worth of campaigning against institutional racism

It is hard to believe that just a month ago very few in the sport had even heard of The Society for Black Lawyers. Now the organisation and its chairman are front and centre of the game's discourse.

But in Herbert's case, of course, it would be wrong to mistake prominence with popularity.

In recent days, he has been described as a sensationalist member of the thought-police. Condemned as a politically-correct, naive, agenda-chasing, publicity-seeking, bandwagon-jumping, johnny-come-lately with no knowledge of the sport he criticises.

Herbert caused a stir when, last month, in the wake of John Terry being banned for just four matches after he was found guilty of racially abusing Anton Ferdinand, he revealed his role in

For many, this marked Herbert out as a divisive figure, encouraging a dangerous 'us and them' mentality. But it was two subsequent episodes that really ensured Herbert would come under fire.

First, he over Chelsea's allegations the referee used a racist term towards Jon Obi Mikel. And then he over their use of the 'Y-word', giving them two weeks to cease the chants before referring the matter, once again, to the police.

It's unlikely that Herbert is too bothered by all the criticism he has received as a result. This is, after all, one of the leading human rights lawyers of his generation, one of a very small number of black judges, a veteran of 30 years' worth of campaigning against institutional racism, and for greater racial equality in the criminal justice system. This is a man who has taken on opponents that make the footballing establishment look positively tame in comparison.

The son of a white mother and African father, Herbert was brought up in the Northumberland mining town of Ashington, home of the Charlton brothers. The only mixed-race child at his school, the teenage Herbert was the victim of merciless verbal and physical racial abuse, an ordeal that helps to explain his subsequent determination to speak out against discrimination at every opportunity.

• a minimum six to nine-month ban for racial abuse, rising to a five-year ban for a third offence

• the creation of representative associations for black players, managers and coaches

• a 20% quota at all levels of the FA, PFA, clubs as well as football agents and referees

• clubs to invest in the personal education of all players, including university or college education

• a system for reporting racial incidents to be set up with details of such incidents, both on and off the pitch, published each year

Described as "exceptionally driven and robust" by one person who has worked with him, Herbert went on to become an internationally-renowned defence barrister, working on some of the most high-profile murder and terrorist cases of recent decades, representing one of the social work managers in the Victoria Climbie Inquiry, and appointed Lead Counsel by the International Criminal Tribunal for Rwanda. Having made submissions to several Judicial Inquiries, namely the Home Affairs Select Committee on Racial Attacks in 1992 and the Stephen Lawrence Inquiry in 1998, Herbert was also a recipient of the American Bar Association's Human Rights Award.

But while Herbert may be exceptionally well qualified to talk about issues of race, many feel he has gone about it in entirely the wrong way.

Herbert's tendency to say what he thinks has got him into trouble before. In 2004, the Bar Council's disciplinary committee found him guilty of breaching its Code of Conduct which bans barristers from voicing personal opinions to the media in cases they're currently acting, a decision he called a "travesty of justice" by a "kangaroo court". Herbert was reprimanded and advised as to future conduct.

But could it be that the outspoken Herbert is in fact exactly what the game needs to shake it out of any complacency it may still have towards discrimination? Some I' hae spoken to in football's anti-racism movement say they agree with almost all of what Herbert says. The SBL's demanding football's authorities get much tougher on racism certainly strikes a chord with most people after Terry's four-match suspension, and the drawn-out process to get there.

The boycott of Kick It Out's Week of Action recently by senior black players told you all you needed to know about the frustration many feel towards the Football Association and Professional Footballers' Association. While the Terry and Suarez cases provided the spark, much of their resentment lay in the sport's continuing inability to address under-representation of ethnic minorities in dugouts and boardrooms.

Some black players feel that KIO, with its shoestring budget, obvious inability to criticise the very organisations that co-fund it, and without a strong voice since the departure of former director Piara Powar, is failing to engage with them, and to speak out enough on behalf of them or their communities. Black players complain that they rarely see or hear from KIO's staff.

Herbert appeared therefore to have timed his arrival on the scene perfectly. And yet, despite their frustrations, which players have actually come out and publicly backed Herbert and his concept of a Black Players' Association? Not one.

Herbert's problem is that football is not the Metropolitan Police or the Judiciary. It does not respond to his version of shock and awe. It is inherently conservative, fiercely independent and does not take kindly to outsiders telling it what to do.

But while Herbert's efforts to forge an organisation to represent black footballers may fail, there is little doubt that he has made the game stop and ask itself:

Tough questions, but ones which deserve answers. Herbert may not be an ex-footballer. He may not have as much credibility or recognition among the fans as Garth Crooks or Paul Elliott. Indeed, he freely admits he is only been to four matches in his entire life. But he speaks at a time when the government wants to see football do a lot more when it comes to the thorny issue of racism.

Think fooball has done enough to combat the problem? Think Herbert's opinions are an irrelevance now the dark days of terrace abuse have thankfully faded? Ask Anton Ferdinand what he thinks. Or Marvin Sordell. Or Danny Rose. Or the youngsters who play for Leicester Nirvana. They claim they were racially abused and subject to monkey noises during a recent under-15 fixture. Herbert and the SBL have taken up their case for free, and the Leicestershire Police are investigating.

Those who run, play and follow football have every right to disagree with the views of Herbert. But they would be wise not to ignore him. The battle to rid the game of discrimination and racism is far from won.