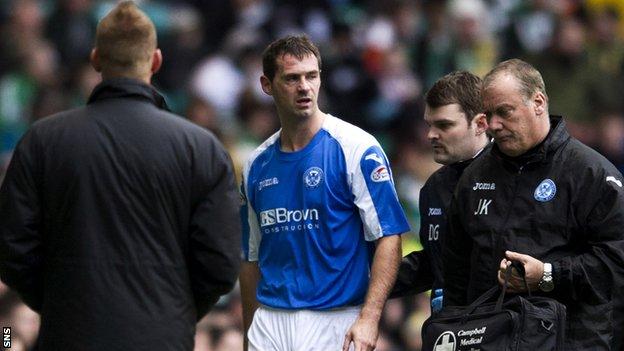 Defender David McCracken has been ruled out for six weeks as St Johnstone's 1-1 draw against Celtic looks likely to result in a double blow for the club.

The Perth outfit are expecting manager Steve Lomas to receive a minimum two-match touchline suspension after being sent to the stand at Celtic Park.

"The centre-half fractured a cheek bone," Saints state on their website.

"The medical opinion at this stage is that it is fractured in several places and surgery cannot be ruled out."

McCracken had been recalled to the starting line-up in place of Steven Anderson but lasted only five minutes following a clash of heads with Victor Wanyama.

Lomas is already the subject of a suspended two-match touchline ban after criticising Ross County defender Grant Munro for his role in the sending off of Saints striker Rowan Vine.

Following the game at Celtic Park, Lomas apologised to referee Iain Brines after being sent to the stand in the second half, but the Perth side expect the Irishman to be sanctioned.

"Lomas is facing a minimum two-match touchline ban after falling foul of referee Iain Brines at Parkhead," the club said.

"The case against the Saints gaffer will be heard by the SFA judicial panel later this month and, while he can be present in the dugout until then, it is highly likely that a two-match suspended ban - awarded in the wake of the game in Dingwall in September - will be invoked at that time."