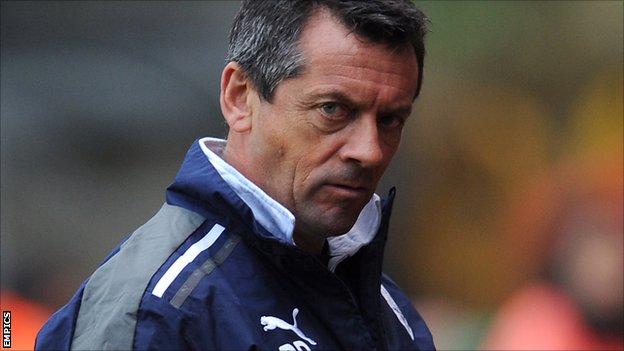 Talks between Hartlepool and Phil Brown about the first-team coach vacancy at the League One club have broken down.

The 53-year-old former Hull boss was expected to be confirmed as Neale Cooper's successor on Tuesday.

But he told BBC Tees Sport that negotiations with the club had stalled.

It is not known whether the board will now approach an alternative candidate from their shortlist, also thought to include Colin Cooper, John Hughes and Craig Short.

Caretaker boss Micky Barron has been in charge since but has been unable to halt a dismal run which has seen them fail to win any of their last 16 games.

The club had conducted two rounds of interviews for the post and Brown emerged as the clear favourite after attending a reserve team match on Monday.

Brown, who has managed Derby, Hull and Preston North End, made 243 appearances for Hartlepool during his playing career.

He has been out of management since a spell at Preston ended in December last year, but was post before it was given to Mark Robins earlier this season,

It was as manager of Hull City that Brown achieved most success, leading the Tigers from the lower reaches of the Championship into the Premier League within 18 months.

Hull retained their top-flight status after their first Premier League campaign, with a victory against Arsenal at the Emirates among the highlights, but the following season proved tougher.

His relationship with Hull turned sour when he was put on gardening leave in March 2010 and his exit was confirmed three months later when an undisclosed compensation deal was agreed following reports that he was owed £1.4m by the club.