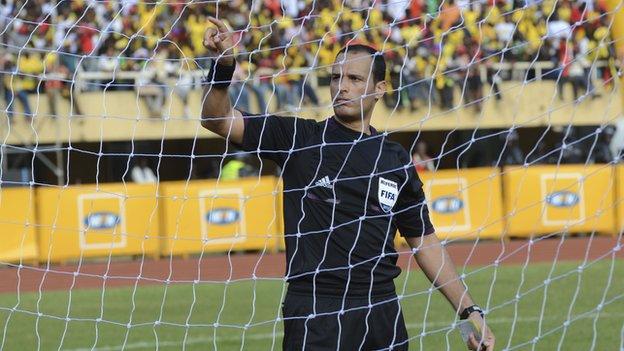 Referees at next year's Africa Cup of Nations will be kept away from the public during the tournament in South Africa to avoid match-fixing.

Similar security measures were used at the 2010 World Cup in South Africa.

Local organising committee CEO Mvuso Mbebe said: "The referees will be quarantined... in a particular hotel which no one has access to.

"They cannot have contact with members of the public, because you don't know what can be exchanged."

He added: "When they leave the hotel, they leave match day minus one, to go to the city..."

Security force members will escort the referees from their hotels to the stadiums. The quarantine will be lifted at the end of the tournament.

The Confederation of African Football has approved the measures for the event, which takes place from 19 January to 10 February.

Meanwhile, following budget cuts, the LOC board members have waived their salaries.

"In the view of the cut even the allowance of board members won't be provided for... it's nil, zilch, because there's no money," said LOC chairman Mwelo Nonkonyana.

Amid sluggish economic growth, authorities lowered their contribution to 205 million rand ($23 million, 18 million euro) to cover costs of around $38 million, with the rest made up of sponsorship, contracts and Caf's contribution.