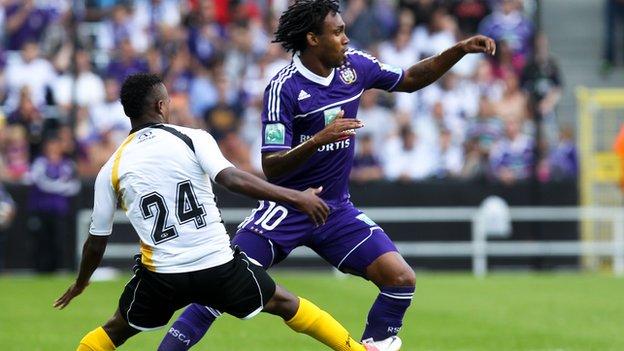 It has been a whirlwind few weeks for South African sensation Ayanda Patosi.

He recently signed a new four-year deal with Belgian club KSC Lokeren and celebrated his 20th birthday on Halloween with his second goal in successive games.

And the graduate of the ASD Academy in Cape Town scored his fifth goal in his last six appearances on Friday, 9 November - a stunning volley in the victory over Standard Liege.

That goal has become an internet sensation and led to calls for Patosi to be included in the Bafana Bafana squad for the first time.

Coach Gordon Igesund did not pick the winger for the friendly against Zambia, but Patosi has not given up hope of representing the hosts in the 2013 Africa Cup of Nations, which takes place from 19 January to 10 February.

"I was expecting the call-up for this game but that's football and you have to respect the coach's decision," Patosi told BBC Sport.

"I would love to have a chance because it's a dream to play for the national team for every player.

"I don't think I'm too young - I'm playing in Belgium against experienced players every week, some of who will be playing in the Nations Cup as well. If I get the chance I will take it."

Lokeren made an early exit from Europe this season, but a run of five straight victories has taken the unfashionable club up to fourth place in the Jupiler League standings.

Playing in a new position on the left wing, Patosi's winning goal in the first of that sequence - a 3-2 win over last season's league runners-up Club Bruges - began his remarkable run of form.

"My performance gave me real confidence," he said. "I told myself 'if I can score against teams like that, then why can't I do it against anyone?' I just have to believe in myself and now things are changing.

"Now after the goal I scored this weekend I am even more confident. I watched the goal again on Youtube when I got home and it was amazing.

"It's my first season playing on the left and I really like it. You can cut in and shoot with my right foot and I think that is helping me get into goalscoring positions."

Patosi added: "We're doing very well and we're not far away from the teams who are ahead of us. There's even a chance we can win the league if we keep playing the way that we are."

Only established by English coach Mike Steptoe in 2009, ASD has already provided several players with the launchpad for their careers - they have Indian teenager Brandon Fernandes currently on trial with Leicester City after he spent two weeks with Reading's development side.

Now Patosi wants to continue his remarkable development in Belgium but admitted he is hoping to follow in the footsteps of compatriot Thulani Serero and join Ajax Amsterdam.

"I don't know yet if there are teams interested in me from overseas but it's my dream to play in a bigger league - hopefully Spain one day," he said.

"For now I would love to play for Ajax Amsterdam because it would be a good step up for me to test myself in Holland."