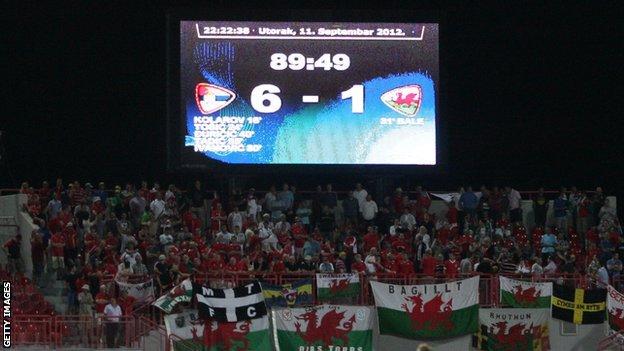 The Serbian Football Association has been fined 5,000 Swiss francs (£3,336) by Fifa for the "improper conduct" of Serbia fans during a 2014 World Cup qualifier with Wales in September.

The Serbia FA (FSS) was also told to pay costs of approximately £667.

The FSS is also waiting to hear what action will be taken after trouble in an Under-21 match with England.

Alleged racist chants were aimed at England's Danny Rose in October and the match in Krusevac ended in ugly scenes as players and officials jostled with each other following the visitors' 1-0 win.

Uefa, European football's governing body, has charged both football associations over their players' behaviour, with the FSS also charged over the alleged racist chanting.

The disciplinary hearing was scheduled to meet on 22 November but was postponed "to allow for further investigations".

An outcome is now expected on Thursday.

The FSS has already suspended two Serbia players, Nikola Ninkovic and Ognjen Mudrinski, from playing for their country for a year, while coaches Srdjan Maksimovic and Andreja Milutinovic were given two-year bans.

However, the FA has said it is still waiting for formal proceedings to be launched.