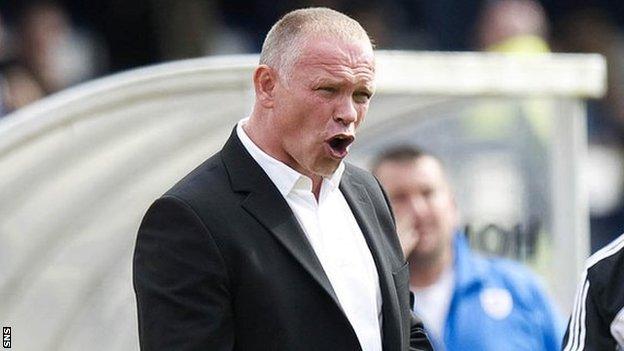 Pools were searching for a replacement after fellow Scotsman Neale Cooper stepped down last month.

The club were in advanced talks with Phil Brown over the vacancy, but these negotiations stalled.

"Everybody knows that this appointment was a crucial one for the club, so we have taken our time, assessed our options and John is the choice we are all extremely happy with.

"He has a vision for the football club, he has a passion and a drive to succeed, and we hope that the fans will be as excited as we have to have him in place."

Micky Barron, who had been acting in charge on a caretaker basis, will remain at the club as reserve-team coach.

Hughes, who guided Falkirk into the Scottish Premier League in 2005, will take charge of his first game in this weekend's fixture with Coventry City.

The 48-year-old joins Hartlepool with them nine points adrift at the bottom of the League One table and with only one win all season.

He moved to Falkirk near the end of playing career, which included spells with Celtic, Hibernian and Swansea.

In 2003, Hughes was appointed as Falkirk's co-manager alongside Owen Coyle but continued to appear in the first team until his retirement in 2005, when he led the Bairns to promotion from the Scottish First Division.

He left Falkirk in 2009 to manage his one of his former sides, Hibs, after the departure of Mixu Paatelainen and guided the club to the Europa League in his first season in the post.

But, after a poor start to the next campaign, Hughes left Easter Road by mutual consent.

A year out of employment followed, before Hughes returned to management at Livingston in February.

However, after just nine months in charge, Hughes has decided to make the move across the border into English football, leaving the Scottish First Division side fifth in the table.

Livingston director of football John Collins said: "I brought John Hughes in with me when I joined Livingston earlier in the year because of his professionalism and passion for the brand of football that I want Livingston to play.

"I'm naturally disappointed that he has attracted the interest of another club, but not surprised, and I wish him well at Hartlepool.

"While John leaving us is a blow, I'm as determined as ever to continue the job we've started together at Livingston."