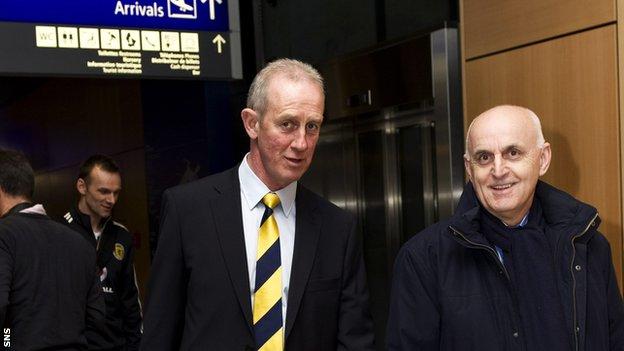 On the face of it, there appears to be little to be gained by Scotland on this trip to Luxembourg.

In the wake of the parting of the ways with Craig Levein, a period of behind-closed-doors regrouping would doubtless have suited the Scottish Football Association too.

But it was the timing of this friendly that ultimately forced their hand in terms of the necessity to make a decision over Levein's future.

Now, that decision having been taken, the SFA and the national team desperately need some positive press.

But that is easier said than done, for the game against Luxembourg presents a potentially awkward scenario.

Though Scotland have slumped to 70th in the Fifa rankings and travel with a far from full-strength squad, anything other than a victory against part-time opposition would be perceived as catastrophic.

And yet, as the interim manager, Billy Stark, pointed out, Portugal struggled to overcome the so-called minnows in a World Cup qualifier in September.

Equally, during a time when qualification for major tournaments was commonplace, Scotland only managed a goal-less draw in Luxembourg under Andy Roxburgh in 1987.

So to expect this beleaguered bunch of players, punch-drunk many of them from the blows suffered in the opening four World Cup qualifiers, to swagger to a handsome victory on Wednesday evening seems fanciful.

But, let's be positive for a moment, what if they do?

What if, minus several "star" players, Scotland trounce Luxembourg by four or five goals?

Would these fringe players - Leigh Griffiths, Andrew Shinnie, Liam Kelly and company - be in genuine contention to start the next qualifier against Wales in March?

Or indeed, would an emphatic win give Stark a genuine case to take over on a permanent basis as the national manager?

These, of course, are entirely hypothetical questions for the time being, but it would be nice to be posing them for real on Wednesday post-match.

For what it's worth, Stark seems to be taking the step-up from his under-21 duties in his stride.

But Levein was the popular choice last time round and look how that ended.

So, while Strachan would undoubtedly be a welcome appointment, the SFA cannot afford to be swayed by public opinion at the cost of appointing the right man.

Whether that is Stark could become clearer by Wednesday night.