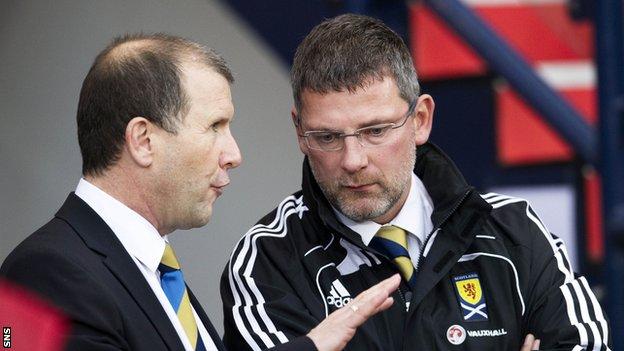 The Scottish FA has confirmed it is involved in a legal wrangle with Craig Levein's representatives over his removal as national coach.

He also appeared to publicly dispute the SFA's explanation over how he was "relieved of his duties".

SFA chief executive Stewart Regan said: "The matter is now being dealt with between Craig's lawyers and the Scottish FA's lawyers."

The parent body stated that it would continue to honour Levein's contract, which has 20 months to run.

"Craig is entitled to his opinion," said Regan. "We made it very clear that Craig's contract had not been terminated, that his terms and conditions would be honoured up to the end of the contract in June 2014.

"It's a legally binding contract and that was our position that we set out very clearly last Monday night.

"Craig has taken legal advice, which he is entitled to do."