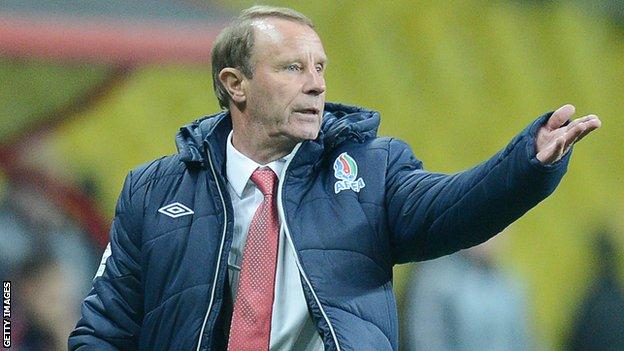 Former Scotland boss Berti Vogts has sympathy for Craig Levein - because the sacked national coach had to make the best of many bad players.

"When you take over Scotland, you have to live with certain things," said the 65-year-old German, who is now in charge of Azerbaijan.

"With the Scottish media and a lot of poor players. I understand, yes.

"Expectations are too high, always. They do not invest many pounds in youth and you have to do that."

The mentality of the players was fantastic

Vogts, who guided Germany to the Euro 96 title, held the Scotland job between 2002 and 2004 but endured a fractious relationship with fans and media before resigning.

Levein's tenure ended in similarly disappointing fashion when he was dismissed earlier this month and the Scottish Football Association is currently assessing potential successors.

Speaking ahead of his present side's World Cup qualifier against Northern Ireland, Vogts took some of the credit for the emergence of Manchester United midfielder Darren Fletcher, now Scotland's captain.

"When I took over I brought in over 12 youngsters," he said. "I brought in a young Darren Fletcher after I saw him in a youth tournament.

"He was 17 years of age and the journalists attacked me and said he was too young, but he is an excellent player."

Asked to pass comment on who might get the job next, the German added: "Who will it be? Maybe Joe Jordan or Gordon Strachan. Maybe they should do it together."

Vogts does not rule out a return to British football at some stage and did praise the Scottish players for their work ethic.

"I have a contract for one year, but I had a very good time in Scotland," he said.

"The mentality of the players was fantastic. They are very professional, they know exactly what to do to prepare and to teach themselves.

"In Azerbaijan, the boys come too late to football at 16 or 17 and you have to teach them. In Great Britain, you play right from school."