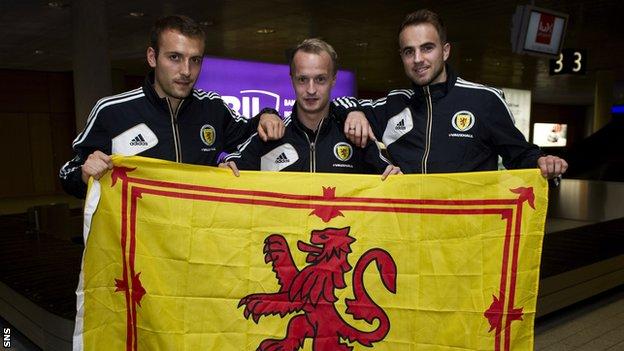 Christophe Berra says the Scotland squad have arrived in Luxembourg in high spirits despite the sacking of Craig Levein and injury call-offs.

Nine players withdrew through injury ahead of the friendly after the departure of the national coach.

"Obviously we have a depleted squad, but there is a good core of players and the ones who have come in are doing really well at club level."

Under caretaker boss Billy Stark, Scotland are looking for a win to boost their confidence after the poor start to the World Cup qualifying campaign that led to Levein's demise.

And they know they will be criticised again if the do not come away with a victory, despite their hosts having recently taken a World Cup qualifying point off Northern Ireland in Belfast.

"Against Luxembourg, we are expected to win, but it's a difficult game," Berra said.

"You look at their past results and Portugal only beat them 2-1 over there.

"So we need to go out and make sure we give 110% and if we do that then hopefully our quality will come through.

"I think everyone knows there are no easy games in international football."

Liam Kelly, Leigh Griffiths and Andrew Shinnie are all newcomers to the Scotland squad.

"I'm sure we have got a lot of options and it's a great chance for players who have not played as much as they want to get a chance," said Berra.

Levein was popular with the Scotland squad, but Berra does not want feelings of disappointment to linger beyond kick-off time in the Stade Josy Barthel.

"We know it's football and it's a harsh world," he said.

"It's just something we have to take on the chin. As players, we go to Luxembourg and will be looking forward to the game, getting a good performance and a win.

"We have all had experience of this beforehand at club level and international level.

"As soon as we get out on the pitch, we'll just be looking to get a good performance, get a good win and score a few goals.

"We have had a couple of training sessions that were really good, nice and sharp and short.

"It's been a good tempo and all the players that have come in have done really well."