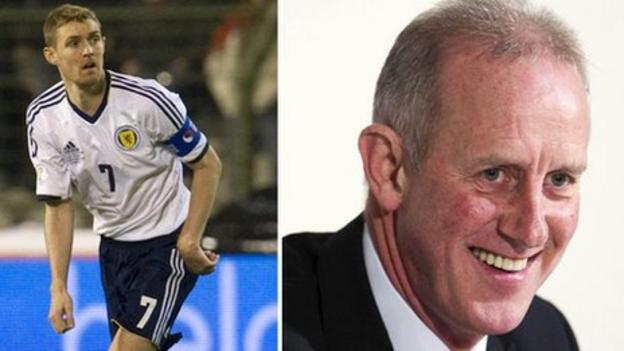 Captain Darren Fletcher has backed Billy Stark to become the next Scotland manager.

Stark was named as interim boss for Wednesday's friendly in Luxembourg after the sacking of Craig Levein.

And Fletcher says the under-21 manager has the ability to manage the senior side.

"If Billy can get a victory and a manager isn't appointed before the next game, then he throws his name into the hat. It'd be a choice backed by me."

Scotland travel to Luxembourg after a dismal start to their World Cup qualifying campaign that has seen them claim just two points from their opening four games in Group A.

And Fletcher has criticised the team for recent perormances that contributed to Levein's dismissal.

Looking at the viable candidates they all seem to be Scottish

"Goals could definitely have been stopped," he said.

"There's been basic switching off and conceding poor goals through mistakes of our own rather than bits of quality from opposition.

"Looking at it in that respect, we need to sharpen up a little bit and make sure that we're not conceding soft goals."

Fletcher captained his country under Levein and expressed sadness at his departure.

"I had a lot of respect for Craig personally and professionally," said the midfielder.

"All the work he did didn't quite transcend on the pitch. He was doing great work off the pitch with the squad.

"We've got a real team spirit. I know these are cliches that people say all the time but it's true. All the players wanted to be there and wanted to play for Craig.

"The things we were implementing, the way we were lined up, he was always tactically aware.

"He just didn't get that rub of the green that you need and ultimately your performance is based on results on the pitch.

"We haven't got off to the best start in the group so the SFA decided it would be best if we parted ways and went for a new manager."

Gordon Strachan remains the bookmakers' favourite to be named permanent successor to Levein and Fletcher wants a Scot to be the next man in charge.

"Looking at the viable candidates they all seem to be Scottish," he said.

"There's a lot of good Scottish managers without a job just now so preferably I'd like that to be the case but if it's not then whoever comes in will get 100% commitment from me and the rest of the squad."