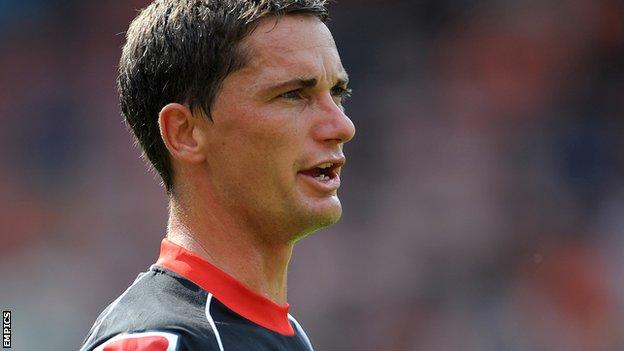 "We've been working on the timing of runs and sometimes he goes in and just stands in there. Cahill was the best at it," Bentley told BBC Radio Lancashire.

"I asked Gary to be on the move. That's what he's done. He came onto the ball perfectly and it's got us the win."

to reach the second round of the FA Cup.

McDonald, 30, joined Morecambe in 2011 after spells with Kilmarnock, Oldham, Aberdeen and Hamilton.

Morecambe, 15th in League Two, in the first round of the Capital One Cup earlier this season, but were then beaten 2-0 by Sunderland in round two.

"We've got a nice tasty tie now at Coventry. The pressure will be off us.

"As players, there's nothing better than the FA Cup. It's just fantastic to get the result and I'm made up for everyone concerned."

Morecambe last reached the third round of the competition in January 2003, when as a non-league club they lost 4-0 at Ipswich Town.

Bentley was sent off after 20 minutes of that game at Portman Road for a professional foul on Pablo Counago.

Meanwhile, youngster Jordan Burrow has been ruled out of action for three months with a knee injury picked up in Saturday's win against Barnet.