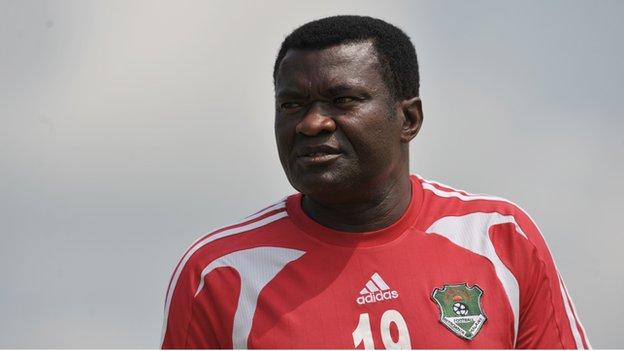 Malawi coach Kinnah Phiri has been told he will sacked if he fails to lead his side to the 2015 Africa Cup of Nations in Morocco.

"Should he fail to meet the targets, then he knows the consequences", said Malawi Football Association general secretary Suzgyo Nyirenda.

"Our away record has been so poor in the past year with no wins, plus the painful exit from the 2013 Nations Cup.

"This has forced us to set up goals," added Nyirenda.

Phiri was appointed in 2008 and guided Malawi to the 2010 Nations Cup tournament in Angola - only the second time the country had qualified.

He signed a two-year contract extension with the Flames in October, keeping him at the helm of the national team until June 2014.

But after the recent defeat by Ghana in the final round qualifier for next year's Nations Cup in South Africa, the Malawi FA's technical sub-committee are eager to ensure the coach is committed to the job.

Nyirenda also revealed the Malawi FA has challenged Phiri to steer his side through to the next round of the 2014 World Cup qualifiers or at least finish second in their group, which includes favourites and leaders Nigeria, Namibia and Kenya.

While Phiri has said while he welcomes the targets, he added that the team requires support and resources.

"We fail to play games on Fifa days and prepare well for tournaments due to lack of funds so I wonder how you set targets for people when you do not give them tools to deliver the job," he said.

"I had to press hard myself to see Malawi play at the East and Central African regional championship, the Cecafa Senior Challenge, otherwise that meant the team could have been idle until March next year when we play in the World Cup qualifiers."

Phiri also hinted that his team is currently in transition and it would be unfair to expect too much.

"Most of senior players are fading and we are now looking for replacements," he said.

"That is why I insisted on playing at the Cecafa Cup so that we assess some of the new players I have brought into the team. I only hope people will use the right means to judge us unlike just focusing on results."